A Sensory Tour of the Watts Gallery

As part of my ongoing work on creative audio description, I have been collecting different ways of experiencing museums. In March I had two very different experiences at the Ashmolean Museum in Oxford and at the Guildhall Museum in Rochester. This weekend I took part in a sensory tour of the Watts Gallery, led by visual artist Monica Takvam. The Watts Gallery is a collection of late-nineteenth-century painting and sculpture by British artist G F Watts, one of the leading artists of Victorian England.

When we met Monica, she explained that rather than giving us a traditional audio-described tour of the paintings, she wanted to take a much more immersive approach to the collection. Before leading us into the gallery itself, Monica asked us to think about the surrounding grounds. We were encouraged to listen to our surroundings and asked to choose words to describe our sense impressions. Once in the gallery, Monica encouraged us to break with conventional ways of experiencing art. Rather than looking at the paintings and sculptures, she asked us to smell them and to find any that smelt particularly strongly. It had never occurred to me before that even sculptures which are more than one-hundred years old still smell of their materials. Paintings too carry the smell of oil paints in them, and a stronger smell can suggest several layers of paint. 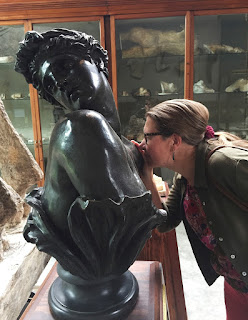 Instead of describing the whole collection, Monica focused on one picture, Watts' painting of Greek mythological figure Clytie. First, Monica encouraged the non-blind members of the group to participate in a collaborative description of the painting. Then she took us outside to a half-hidden sunken garden where we were able to touch a stone bust of Clytie which Watts made as a study for the painting. We also had the chance to explore the cast-iron bust pictured above. By juxtaposing painting and busts, Monica cleverly used Watts' own artistic practice to create a sensory experience of the painting.

In the final part of the tour, Monica, who is the artist-in-residence at the Watts Gallery this year, introduced us to her own work. I was particularly drawn to two photographic portraits of blind people hanging on the wall of her studio. 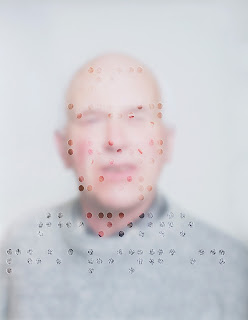 This photograph shows one of Monica's artworks. It represents a man's head and shoulders. The man's features appear blurred because they are behind a sheet of Perspex. Holes in the Perspex form words in braille.

This portrait is hanging on the wall of Monica's studio at the Watts Gallery. Monica invited us to touch the Perspex cover and explore the holes pierced in it. The holes spell out words in braille but these words are too difficult for a braille reader to understand: like David Johnson's art installation they are 'Too Big to Feel'; they are also absences rather than raised dots. Sighted viewers are just as frustrated in their quest for information. Through these holes we are given tantalising glimpses of the photograph beneath. but it is not possible to build up a complete picture of the man's face. This piece challenges both blind and non-blind ways of seeing. It remains impervious to the sighted gaze whilst also denying blind readers easy access to it. It raises questions about how we see and how we look at other people. It also creates an association between blindness and sightedness which emphasises their shared lack of perception. 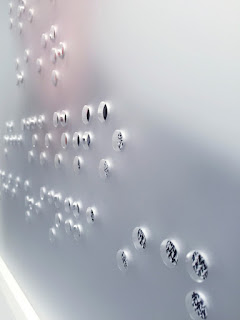 This photograph is a close-up of the Perspex cover with the braille holes in focus. Details from the photograph are visible through the holes whilst the portrait itself remains blurred.

Like her art, Monica's tour brought blindness and sightedness into dialogue. As well as myself, our group included one completely blind adult, two non-blind adults and two non-blind children. Rather than focusing on the blind members of the group, Monica included everyone: by privileging all our senses, and by thus introducing new ways of experiencing art, she encouraged everyone to rethink their relationship with visual dependency and to explore their neglected senses.
Hannah Thompson at 17:52
Share