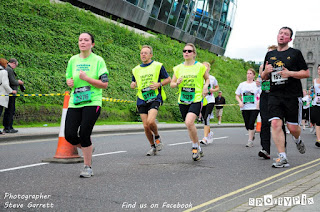 My Dad started running marathons and half-marathons 32 years ago. As a child, I remember standing shivering on pavements around Tyne and Wear trying to spot him as he sped past en route from Morpeth to Newcastle (in the  New Year's Day road race) or from Newcastle to South Shields (in the now world-famous Great North Run). Little did I know that years later he would be running alongside me as my guide runner.

I took up running a couple of years ago but have only recently started running with a guide runner during races. Races are crowded and frantic affairs. I find it bewildering trying to run amongst thousands of runners who are constantly jostling for a clear piece of road. But with a guide runner by my side, I feel much more confident. Dad described the route to me as we went along, pointing out kilometre markers, water stations and, most movingly, the seven famous Newcastle-Gateshead bridges that I grew up with. It felt amazing to run past the Sage with the man who first took me to concerts there (and who now takes my children).

This is the first race I've done wearing my very bright RNIB tabbard. At first Dad and I were both worried about feeling self-conscious: it feels odd to advertise your disability in such a public way. But my travels with my white cane have shown me that announcing my blindness is only ever a positive experience. And so it was during the race. Runners were without exception courteous and mindful of our presence. And marshals and spectators along the route were enthusiastic in their applause and encouragement. And on a hilly course like the Great North 10k, every little helps.

In May I ran the Oxford Town and Gown 10k with another guide runner, my colleague and friend Cathy Thorin. She was a brilliant guide on a course that was narrow and very busy in places. But we were not wearing anything which told runners who we were. My recent run with my Dad suggests that fellow runners and spectators alike respond better to more obvious signs of blindness.

Posted by Hannah Thompson at 09:31 No comments:

Clash of the Canes 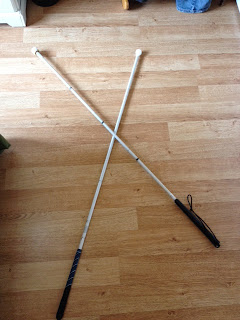 I was given my first long white cane a couple of years ago by Oxfordshire's sensory deprivation team. It is a functional and workaday kind of cane, solid and (until recently) reliable. But you couldn't call it elegant or sophisticated. When I was in Paris a couple of months ago, the roller-ball tip on the end of the cane got stuck in a metro pavement grating and came off. Once a kindly Frenchman had helped me locate it and stick it back on I continued on my way, anxious that my cane was no longer quite as robust as it had been.

So on my most recent visit to Paris I decided to treat myself to a new white cane. It felt good to be taking the decision to buy one (as one might buy a new handbag or hat), rather than having one thrust upon me at the taxpayer's expense and with no discussion of accessorisation. Fellow cane user Cathy Kudlick had told me that the Association Valentin Hauy sold some remarkably stylish French canes, and she was right. I tried three different ones and settled on a thin, sleek and lightweight model with a nifty folding device and a comfortable, yet attractive handle.

The following day I was walking home from the library. As I passed a particularly busy pavement cafe, something black and person-shaped zoomed out in front of me and I heard an oddly familiar sound. My new cane makes a comforting rattle as it goes along and the sound I heard was of another, similar, rattle, colliding with my own. Another cane user had come out of the cafe and our two canes had clashed. I didn't know whether to laugh or apologise so I clumsily did both. He grumpily accepted my apology as i would grudgingly accept an apology from someone who had carelessly walked into me because they weren't looking where they were going. I realised then that he hadn't noticed that I too had a cane. How embarrassing to be mistaken for an unobservant sighted person! I can't imagine what the beer and kir drinkers in the cafe must have made of our bizarre encounter.

In the heat of the moment I didn't explain his mistake, but gathered my wits and my cane and moved out of his way. Off he went down the pavement, oblivious to my own blindness and the things we might have had in common. I wish now that I'd gone after him and introduced myself. But I like to think that maybe one day he'll come across this blog and recognise himself.
Posted by Hannah Thompson at 10:52 No comments:

How not to welcome the Olympic Flame 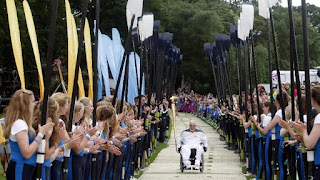 On 6th July 2005 I was sitting on the floor of a rented house in Oxford. I was holding my seven-month-old baby boy in my arms, watching a live announcement on TV and explaining to him why it was such great news that the 2012 Olympic Games would be held in London. I spoke a message of hope, equality and peace into his tiny ear.

Yesterday I took my boy, now an exuberant seven-year-old, to greet the Olympic Flame as it arrived in Oxford. We cheered and clapped as it reached the stage in South Park. But this truly once-in-a-lifetime moment was spoilt for me even before I managed to catch a glimpse of the flame. It wasn't the mass of promotional material for a soft drinks company, a bank and a mobile phone manufacturer that spoiled it (although that certainly did not help), it was one sentence of the welcome speech delivered by the Leader of Oxford City Council just before the flame arrived.

The torch was carried into South Park by sports coach Malcolm Fretter. As he introduced him, Bob Price said something along the lines of, 'Malcolm is in a wheelchair, but has made a huge contribution to sport in Wantage'. The problem with this sentence is the word 'but'. It seems such a small and insignificant word. Yet it conveys a deeply troubling message. The assumption behind this sentnece is that Malcolm is an inspirational coach and community leader because he does his work from his wheelchair. Every day he struggles to overcome the adversity that is his disability, every day he fights, and wins, a battle against his impaired body.

This assumption posits disability as something negative which has to be overcome, triumphed over, defeated. It sets up a hierarchy between the able-bodied and the disabled in which the disabled are second-class, always struggling to do things that the able-bodied take for granted. It implies that we would be better off without disability altogether.  It suggests that disabled people who manage to live a 'normal' life are heroes who should be celebrated for their bravery and tenacity.

I have absolutely no doubt that Malcolm has done great work in his community. And I'm sure that being in a wheelchair must be annoying, frustrating and inconvenient at times. I have no wish to denigrate him or his achievements. What I object to is the persistent assumption, by most people, that disability is a hardship, something that we would be better off without. How do you think that makes the permanently disabled feel? Every time someone makes this kind of assumption, especially in public, in front of a 20,000 strong crowd, the negative image that disability has is strengthened. And the disabled become less integrated, more marginalised.

What if we looked again at disability? How might seeing disability in a positive light be better for both the disabled and the able-bodied? It would remind us that bodies come in all shapes and sizes. It would show us that no-one is perfect: some people's imperfections are more visible than others, but everyone has a weakness. And that is fine. It would allow everyone to be happy with their own body, valuing rather than either hating or denying its particular limitations. And it would remind us that surface appearance can be deceptive, that our most interesting and significant characteristics aren't always visible to the naked eye.

I am taking my seven-year-old boy to the Paralympics in September. I want to try and counter the negative images of disability that he is constantly bombarded with despite my very best efforts. Perhaps Bob Price should try and get hold of some tickets. I hear they haven't quite sold out yet.

** UPDATE **
I sent Councillor Bob Price a link to my blog and a letter objecting to his choice of words. I received the following reply which he has given me permission to post on this blog. I post it unchanged and without comment:

I am truly sorry if my use of that particular construction has given rise in your, or anyone's mind, to that negative interpretation.

It was not a carefully constructed speech, having been asked to do it only two hours earlier. And in the two minutes max that was allotted I was seeking to to hold up Mr Fetter as one of the 8000 'local heroes' ,as someone who had continued to work very extensively with sports and community groups despite the limitations deriving from his illness.The 'but' was intended to denote admiration and worth.

Thank you for your consideration in drawing this to my attention. I will be more careful in future.