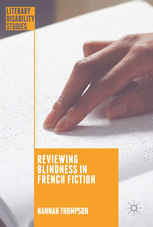 This image shows the front cover of Reviewing Blindness in French Fiction by Hannah Thompson. Above the title, a hand is shown reading a sheet of Braille.


I am delighted to announce that my book Reviewing Blindness in French Fiction has been published by Palgrave in their Literary Disability Studies series.

In this work I show how and why French fiction is fascinated with visions of blindness by identifying and analysing the complicated relationship between writers, readers and fictions of blindness that permeates French fiction. Blindness is a mysterious phenomenon. It arouses curiosity and invites discussion. It is also a multi-layered and multi-faceted collection of narratives. Writers are drawn to blindness precisely because blindness itself is a collection of stories. The stereotypes, clichés and misconceptions which constitute what most non-blind people describe as “blindness”, have been described by David Bolt as a literary “metanarrative”. Whilst many French depictions of blindness reinforce and conform to the various strands of Bolt's mostly negative metanarrative, my work focuses on more positive depictions which question, undermine or deconstruct the prevailing myths of blindness. I re-view a selection of the most interesting, surprising and moving depictions of blindness in French fiction by authors including Brigitte Aubert, Honoré de Balzac, Georges Bataille, Tonino Benacquista, Maxime du Camp, Lucien Descaves, André Gide, Jean Giono, Hervé Guibert, Victor Hugo, Thérèse-Adèle Husson, Paul Margueritte, Guy de Maupassant, Marc Monnier, Maurice Renard, Didier Van Cauwelaert, Fred Vargas and Romain Villet.

Works by these authors contest and overturn received ideas of blindness through both the form and the content of their fiction. When blindness sheds its metaphorical meanings and exists as part of a narrative on its own terms, it becomes a positive signifier of change, desire, success and enhanced subjectivity.

Chapter 2: The French Metanarrative of Blindness
I survey those literary depictions of blindness which reinforce the metanarrative of blindness discussed by David Bolt. Maupassant’s short story ‘The Blind Man’ evokes the blindness-ignorance and blindness-darkness synonymies whilst also using nominalisation and generalisation to dehumanise its protagonist. Blind male characters are represented as weaker, less active and less able to access language than their non-blind peers. Female blind characters, on the other hand, are often portrayed as meek and passive victims of their condition. Non-blind characters routinely trick, pity and manipulate blind characters in these typhlophobic fictions of blindness. The chapter ends with an analysis of André Gide’s The Pastorale Symphony which shows how myths of the blind mystic and of sensory compensation emphasise blind protagonists’ otherness.

Chapter 3: The Creative ‘Look’ of the Blind ‘Seer’
This chapter marks the beginning of  my sustained examination of the creative possibilities of blindness. Through close-readings of novels and short stories by Honoré de Balzac, Victor Hugo, and Thérèse-Adèle Husson, I show that the unseeing gaze of the blind protagonist often transforms him or her into a surrogate narrator who is paradoxically more adept at gathering information than the sighted narrators usually present in realist texts. In works which feature blind narrators, the process of information gathering and dissemination becomes an even more overt challenge to the traditional supremacy of the sense of sight.

Chapter 4: Non-Visual Language and Descriptive Blindness
This chapter considers works by Hervé Guibert, Jean Giono, Romain Villet and Lucien Descaves which use blind characters to sensitise the reader to the descriptive power of non-visual language. In Blindsight, Guibert uses visually impenetrable language to stimulate his readers’ other senses whereas in The Song of the World, Giono mobilises the presence of a blind character to signal his use of non-visual description throughout the novel. My detailed reading of Descaves’ extraordinary novel of blindness, The Trapped, reveals not only that non-visual description is a highly effective way of communicating with a non-blind reader, but that Descaves includes braille in his novel in order to temporarily exclude his sighted readers.

Chapter 5: Male Desire and the Paradox of Blind Sexuality
In the first part of this chapter, I use readings of scenes of castration and pornographic pleasure from Hervé Guibert’s Blindsight and Georges Bataille’s Story of the Eye to suggest that both authors undermine the traditional dominance of the voyeuristic male gaze. In the second part, I explore how the non-visual eroticism suggested by the blindness-castration association is manifested in the descriptions of blind male desire found in Lucien Descaves’s The Trapped and Romain Villet’s Look.

Chapter 6: Silenced Sexualities: Listening to the Voice of the Blind Woman
Unlike the examples of blind male desire discussed in the previous chapter, the voices of blind female characters are much harder to hear. Blind female protagonists often remain silent in their texts: they are frequently unspeaking objects of the sighted male gaze and when they do speak, their words are often filtered through the voice of the male narrator. Detailed readings of Thérèse-Adèle Husson’s Reflections and Didier van Van Cauwelaert’s Jules shows how it is possible for a blind woman to subvert many of the stereotypes of blindness in order to express herself.

Chapter 7: Blind Assassins
This is the first of two chapters to focus on a specific literary genre, in this case the roman noir. Close readings of detective fiction by Fred Vargas and Brigitte Aubert show how this traditionally ocularcentric genre can be subverted by the presence of blind characters who encourage both other characters and the reader to reconsider the assumptions they routinely make about blindness. By comparing how male and female blind detective figures relate differently to the crimes they are solving, I also show, in chapters 5 and 6, that blind men and blind women are treated differently by both friends and enemies.

Chapter 8: Science, Fantasy and (In)Visible Blindness
Science fiction’s fascination with invisibility tells us more about blindness than it does about vision. Taking Maurice Renard as my main example, my detailed readings of The Blue Peril and The Doctored Man show that rather than reinforcing the supremacy of vision in the hierarchy of the senses, narratives which present us with different ways of seeing can in fact be read as celebrations of the powers and possibilities of blindness.

Chapter 9: Conclusion
I use Tonino Benacquista’s critically acclaimed 1991 roman policier, La commedia des ratés to show how French fiction’s most interesting representations of blindness are those which draw attention to a range of stereotypes of blindness before using surprising imagery, plot twists, characterization or stylistic features to undermine the reader’s expectations. This novelistic subversion encourages the reader to look again – or re-view – his or her understanding of blindness. Blindness is best understood as a multi-faceted and multi-layered collection of narratives which, when re-viewed together, testify to the powerfully creative potential of blindness.

Reviewing Blindness in French Fiction is available as a hardback or e-book from Palgrave or amazon. If you are interested in reviewing the book, please get in touch.

Posted by Hannah Thompson at 09:35