In Praise of Public Transport 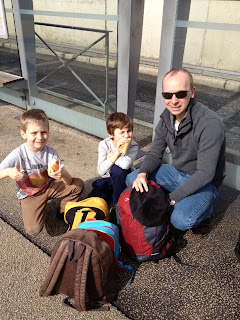 Waiting for the bus in Nimes, April 2013

Most people assume that not being able to drive is the most negative thing about being registered blind. But I have never seen it that way. At times not being able to hop in the car at will can be mildly inconvenient but this is an occasional annoyance rather than a tragedy.

The same people who feel sorry for me because I will never drive, tend to overlook the main advantage of not driving: public transport. I love public transport. True, it is generally slower than going from A to B by car but once you've accepted that speed is not necessarily as important as Jeremy Clarkson would have us believe, and got used to a little bit of forward planning, public transport is a lot of fun.

This year I managed to convince my (driver) husband to put this theory to the test by travelling round France exclusively on buses, trains (both under and overground) and trams. French public transport is cheap, plentiful and well-organised and we managed to do everything we wanted (including a trip to the remote Pont du Gard) without a car. Public transport is a great way of feeling part of the country you are visiting. Conversations spring up easily with fellow passengers (especially when you have two chatterbox children with you) and it gives much more interesting insights into the minutiae of everyday life than a cocoon-like car. Studying train timetables and eavesdropping are two of my favourite pastimes so I am particularly well-suited to the combination of co-ordination and communality which makes public transport such a pleasure. And listening to people's conversations (especially in France) always makes me feel more at home. 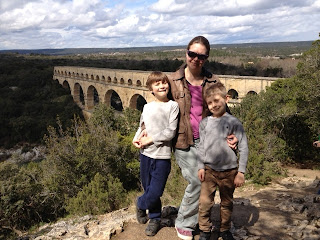 Recent eco-initiatives have made public transport more popular but it is still vastly underrated. For most people is it is a second-choice or worst-case scenario. But my blindness allows me to experience the fun, adventure and camaraderie of communal travel which car drivers unwittingly miss out on.
Posted by Hannah Thompson at 10:40 2 comments: 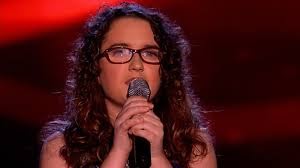 Andrea Begley during her 'blind' audition
(from bbc.co.uk)

At first glance BBC One's The Voice appears to be just another Saturday teatime talent show. Yet what sets this particular programme apart is its intriguing format, a format which has the potential to make the Great British Public think differently about blindness (and the blind).

In the early stages of the competition - the so-called 'blind auditions' - the four celebrity judges must decide whether or not they want to back each singer purely by the sound of their voice: they sit with their backs turned and focus only on what they can hear. Once they commit to supporting a performer, their chair turns round and they are allowed to watch the remainder of the audition.

When I came across the first series of the show last year I was very taken with its early stages. I liked the way these 'blind' auditions create a level playing field for the performers where age, size and shape no longer matter. I also liked the way that the judges' 'blindness' became a virtue: it seemed to make them more discerning, more focused, more 'real' in their choices.

I don't remember last year's episodes addressing the concept of 'blindness' head on: the term 'blind auditions' was nothing more than a phrase coined to help market the show.  But this year, the presence of partially blind singer Andrea Begley at the auditions gave the first episode a whole new dimension.

Public perception that blindness is a tragedy is so pervasive that it is almost impossible to find stories of blindness in the media which do not talk of bravery or courage, struggle or overcoming. But this is not Begley's story. On her website and in her performances Begley is first and foremost a singer. Her blindness is secondary to her career; it is an inconvenience, not a limiting or defining feature. If Begley is disabled, it is not by her lack of sight, but by society's attitude to it. Begley wanted to appear on The Voice because she wanted to be judged for who she is, not for who people think she is. And the fact that two judges turned proves that her blindness is neither here not there.

But however much The Voice claims to value 'blindness', this sightlessness is only temporary. Once the audition is over, the appearance of the performer is revealed. And it is no coincidence that as soon as the judges knew about Begley's blindness, their comments became tinged with that mixture of pity and awe which is so often found in discussions of the disabled. As with press reports of her performance (which found her 'heartwarming') it was hard to tell whether the judges and the audience were applauding Begley's singing, or the fact that they thought she had succeeded despite her blindness. It is a dismal reflection of society's persistently negative attitude towards blindness that Begley felt she needed to use a 'blind' audition in order to be judged on her own merits. But it is an even more dismal irony that the very show which has the potential to recast 'blindness' positively, appears to have done the precise opposite.

I am delighted that Begley has made it through to the next stage of the competition. It is hugely important for society to see images of happy, talented and successful blind people. But I worry that public reactions to Begley's blindness will undermine her own positivity by constantly assuming that she deserves pity rather than respect.
Posted by Hannah Thompson at 19:11 1 comment: