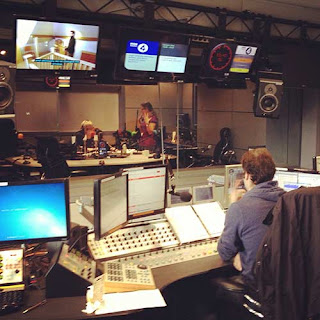 Me and Jenni Murray just after my interview.
Many thanks to fellow guest and children's book illustrator Sarah McIntyre for taking this photo.
Sarah has written a great account of our Woman's Hour adventure here.

I have loved BBC Radio 4 all my adult life. We have at least six radios in our house and I increasingly listen via my phone wherever I am. Radio 4 wakes me up every morning and accompanies me on car, train, bus and plane journeys. It has stopped me feeling lonely in hotel rooms from Salford to Salt Lake City and keeps me amused when I am cooking. I even listened to Radio 4 whilst giving birth to my two sons.

Yesterday was quite simply one of the most exciting days of my life. I moved from passive listener to active participant as I was interviewed by the majestic Jenni Murray on Woman's Hour (from 30:30). I was talking about my take on the What I See project and the ways modern society is obsessed with how we look.

It seemed particularly fitting that I was arguing for a rethinking of the hierarchy of the senses via a largely sightless medium. Radio 4 is an essential part of mainstream British culture. And yet its enduring hold over the nation testifies to the fact that sight is not a necessary part of our lived experience. Yesterday I realised that radio journalists and producers build a subtle kind of audio description into everything they do. Places and people are announced as a matter of course. Every time Jenni Murray asked me a question she prefaced it with my name. Her primary reason for doing this was to remind listeners who I was and to differentiate my voice from that of my fellow interviewee Edwina Dunn. But Jenni's technique was crucial to me for another reason. Because I cannot always see enough to know when someone is addressing me, I rely on the kinds of audio prompts which are much more common on the radio than in real life. 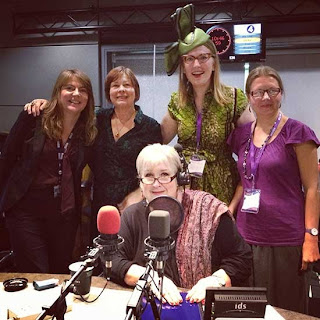 The Woman's Hour team:
Jenni Murray in the centre, and from the left Assistant Producer Jane Worsley, Producer Bernadette McConnell, fellow guest Sarah McIntyre and me.

There is no doubt that modern society places too much emphasis on the visual. And this has the unpleasant consequence of marginalising the blind and the partially blind. But my experiences yesterday reminded me that anyone who engages with radio - as listener, presenter, producer or technician - already has an intuitive appreciation of the non-sighted world. Anyone who listens to the radio already knows what it is like to be blind: it is not a tragedy, it is just a different way of being.

What I See when I look in the Mirror 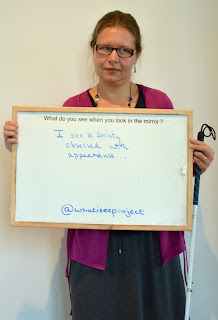 According to its press release, the What I See Project is 'a global online platform that recognises and amplifies women's voices'. I was delighted to be asked to be part of this fascinating project, but I was also worried by the project's apparent emphasis on the visual. As I say in my video reflection, modern society's obsession with how we look has the unintended consequence of privileging sight over all the other senses. This in turn has the nasty effect of turning blindness into a tragedy.

I have found that society's obsession with the misery of blindness makes it very difficult for the blind and the partially blind to feel happy and confident about themselves. When pity is the prevailing emotion you encounter in strangers, it is easy to think of yourself as a victim. Self-pity is a destructive state of mind; it leads to low self-esteem and depression. But until society stops pitying the blind, how will the blind learn to stop pitying themselves?

I want to use my part in the What I See project to encourage women to think critically about our relationship with sight. Why do we care what we see in the mirror? Why is appearance to crucial to us? Do we really learn important details about a person from how they look to us? My face-blindness means I cannot recognise my family, friends and colleagues by their facial features. Instead I recognise them by their general shape, their unique style and their voice. This can have its disadvantages but it also has its uses. It constantly reminds me that we are much more than what we appear to be: we have experiences, history, memories which are not necessarily visible on our surface. As another contributor to the What I See project, Karen Morris at Beyond the Bathroom Scale reminds us, bodily appearance is overrated. Karen writes eloquently about the need to embrace the reality of how our bodies look here.

The communicator videos and ambassador profiles on the What I See webpage are reassuringly resistant to the purely visual. It turns out that I needn't have worried. Most women see much more than their surface appearance when they look in the mirror. But society at large is still obsessed with sight. Hopefully this will change in the wake of this exciting project.

Upload a video describing what you see when you look in the mirror and you might win an invitation to the What I See launch event at the Science Museum on October 1st.


Posted by Hannah Thompson at 07:44 No comments: