This morning I received an (unsolicited) guest post from one of the students on my new final-year course Blindness and Vision in French Culture. I am delighted to publish it below. 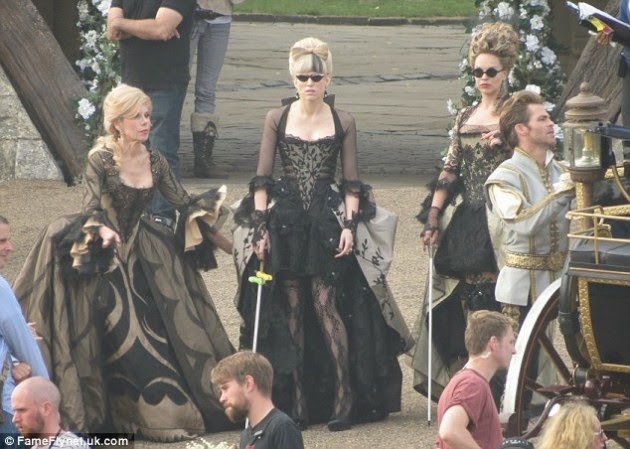 (this photo shows Christine Baranski as Cinderella's stepmother and Tammy Blanchard and Lucy Punch as her two blind sisters, complete with white canes and dark glasses, on set during filming of Cinderella's wedding at Dover Castle)

Into the Woods: A Review
A Guest Post by read_and_dream

While I loved Into the Woods on a superficial level for its fun songs, clever interweaving of various fairy tales, and its gentle mockery of Hollywood stereotypes; I found the sexual undertones of it interesting as well, and the implications of what “into the woods” actually meant. However, there was one thing that I found problematic, something that wouldn’t have bothered me before I started the course Blindness and Vision in French Culture: this was how blindness was presented. I was expecting the prince from Rapunzel to be blinded, as I already knew the original story, but I was not familiar with the Aschenputtel version of Cinderella, in which the two evil sisters are blinded by the birds that Cinderella has at her command. It is not so much that I have a problem with this (although considering blindness as a punishment is problematic), but it is the way in which the sisters are presented after they lose their sight. Their blindness is presented as comic, as they blunder around. Had they suddenly become deaf, or wheelchair using, we would not have felt permitted to laugh, so why laugh at blindness? I think it may lie in the theory that we laugh at things that make us anxious; in this highly ocularcentric world, most of us, deep-down, have a fear of losing our sight, as we perceive it to be our most important sense. Or it could be classed as dark laughter; laughter that comes from a sense of superiority over others who are suffering. Why do you think so many people watch Big Brother?  It is not because it is good television. Going back to the film, I definitely felt uncomfortable at the fact that people were laughing at the sisters. I also felt  uncomfortable at the tragic presentation of the prince’s blindness; yes, it is horrible to fall on thorns and have your sight removed in that way, but he still manages to find Rapunzel using his hearing, and yet we are hardly given time to appreciate this before she has healed him with her tears. He is not given the choice over whether or not he wants his sight back; just like Gertude in La Symphonie Pastorale, it is taken as a given.  For once I would like to see a film where someone is given the chance to regain their sight, but refuses. I think that this would challenge people’s perceptions about the tragedy of blindness and let them see that it is just another way of being. A way of being without seeing.

Posted by Hannah Thompson at 21:33