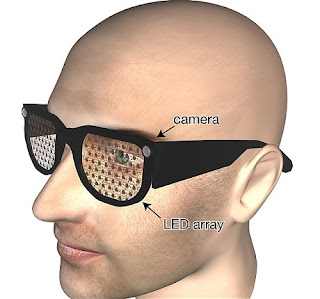 Much as I love my white cane, it does not always keep me safe. It helps me avoid pavement-level obstacles like bollards and kerbs but it is not so good at detecting overhanging branches, open windows or head-level signs. In fact I always seem to have a bruise or a bump somewhere on the upper half of my body from an annoying or painful collision with an unexpected object of some kind.

Last week I took part in some fascinating research which might well put an end to these injuries. Dr Stephen Hicks and his team at the University of Oxford Department of Clincial Neuroscience are developing some 'smart glasses' which use a tiny camera and an LED display to create a live, real-time image of the size, shape and position of solid objects. This would mean that sign-posts, wheelie bins and bus shelters would become completely detectable, even in absolute darkness. (I forgot to ask Stephen whether the glasses would also detect the partially blind person's least favourite objects: mirrors, transparent walls, display cabinets and glass doors).

I spent two hours with Stephen and his team testing out the glasses. When I put them on I felt like a character in a science fiction novel. Like Jean in Maurice Renard's novella 'The Phony Man' I was suddenly seeing the world in a completely different way. Objects which would have been impossible for me to see shone before my eyes in shades of pink and white. I found the glasses incredibly easy to use and within minutes I was happily navigating my way round a series of obstacles. I would find these glasses especially useful at night, in glaring sunlight or in dappled shade. They would not only stop me from walking into things, they would also help me keep a watchful eye on my children who are often the first things to disappear when light conditions affect my vision.

Stephen and his team are still testing the glasses and are keen to hear from anyone who might find them useful. I'm hopoing to go back in a few months to have another go.

Posted by Hannah Thompson at 17:41