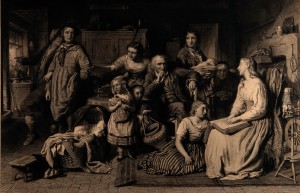 W. Ridgway after George Smith,
Light and Darkness, engraving, 1871 (Wellcome Library)
Louis Braille is one of the heavyweights of blind history. Along with Helen Keller he is the blind person children are most likely to learn about at school and as MIchael Mellor recently demonstrated, he is (rightfully) celebrated across the world for the creation of his eponymous writing system. But this overwhelming focus on Braille’s achievements gives us a rather unbalanced view of how tactile reading and writing systems developed in the nineteenth century. The Musée Valentin Haüy in Paris, and now the Touching the Book exhibition currently running at Birkbeck College, London, tell a rather different story.
The visitor to both exhibitions is immediately struck by the variety of different reading and writing systems on display. Before Braille was eventually adopted as the universal language of the blind in the late nineteenth century (and even later in the United States), books were being produced in a number of different tactile alphabets. In Paris, Valentin Haüy developed a raised-letter system based on the Roman alphabet which was used for some years at the Institut National des Jeunes Aveugles even when Braille himself was a teacher there. In the UK, five or six alternative systems competed for supremacy, each being championed by a different blind school, church organisation or wealthy philanthropist. The variety of these systems testifies both to the ingenuity of their inventors and to the fact that enabling the blind to read was a legitimate, even urgent project in Victorian England.
I would recommend the 'Touching the Book' exhibition to anyone interested in education, science, religion, visual culture or blindness in the Victorian era. It offers a fascinating glimpse of the race to develop the most useful tactile reading system and shows that Louis Braille is not the only one who deserves a place in history.

This guest post for the exhibition's blog explains some of the differences which I have noticed between British and French embossed books.

Posted by Hannah Thompson at 17:10