Book Review: What is Visible by Kimberly Elkins 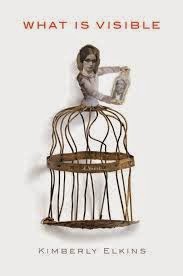 This fascinating and enthralling novel is a fictional (auto)biography of Laura Bridgman, the first deaf-blind American to be taught to communicate using the manual alphabet. Bridgman, who was educated at the Perkins School for the Blind by Samuel Gridley Howe, is now much less well-known than her more famous - and more photogenic- successor Helen Keller, but in mid-nineteenth-century America, Bridgman was one of the most celebrated women of her day.

As the book's 'Afterword' demonstrates, Elkins is a careful and respectful researcher who has used her detailed knowledge of both Laura's life and the wider historical context to recreate one version of Laura's 'most fascinating and complex inner life'. The novel's prose brings Bridgman to life in ways which are both touching and intriguing. Throughout the book, we gain a real sense of what Laura might have been like through the passages written in her own voice which express inner thoughts, feelings and desires which she might have kept from those around her. The novel's readability comes from Laura's complex, persuasive and compelling narrative style: she is at once both astonishingly naive and startlingly perceptive; deeply expressive yet stubbornly secretive.

Elkins's treatment of Laura's sexuality is a particularly intriguing element of the novel. Female sexuality was a taboo subject in Victorian America and many people still struggle to imagine disabled people with full and active sex lives. Rather than avoiding references to sex, Elkins celebrates Laura's uninhibited and unorthodox responses both to her own body and to the bodies of the people around her.

Laura's intimate first-person narrative alternates with the thoughts, letters and journals of the main people in her life - Gridley Howe, his wife Julia and Laura's teacher Sarah - to create a multi-layered narrative in which the reader is often shown several versions of the same event and asked to make sense of them. Through these other characters' chapters we realise that sightedness does not necessarily lead to insight and that blindness can be moral, emotional and political as well as physical. It would have been very easy for Elkins to fall into the trap of portraying Laura as a 'blind seer' (much like Victor Hugo's Dea) who paradoxically understands more than the metaphorically 'blind' sighted characters. Instead, Elkins uses her multi-perspectival narrative to show that no-one can truly know themselves or be known by others. Knowledge, like sight, is over-rated and misunderstood. We are never really visible.

As well as providing an enthralling tale of several interwoven lives, this novel also offers an insight into the political and religious tensions raging in mid-nineteenth-century America. Laura was used as a pawn by several factions and through both her responses and the thoughts of the other characters, we gain a real sense of the issues surrounding women's suffrage and emancipation, the abolition of slavery and the racial tensions which led to the American Civil War.

Bridgman was not only deaf and blind, she also had no sense of taste or smell. Elkins's focus on Laura's sense of touch can be read as a celebration of the tactile which emphasises that the absence of the other senses does not necessarily lead to a less-full existence. Indeed, Elkins's novel does an excellent job of refuting the 'blindness as tragedy' myth which circulated in Laura's time (as it still does today). Whilst the novel is full of characters who pity Laura, she never sees her blindness as a tragedy. She is sensuous and passionate, always wanting to experience more of life. If she is disabled, it is by her guardians and teachers whose words reveal how they sometimes see her as less than human - she is variously a burden; an embarrassment; a trophy; something 'special', fragile or volatile; a child to be protected; an animal to be tamed. What we see, from her own words, is an intelligent and responsible woman who is just as much of a person as those who both limit and judge her.

Above all, What is Visible raises important questions about how both non-disabled people and disabled people might relate to questions of pity, dependency and trust. As such it resonates with current debates around independent living, care-giving and the place and status of disability in society.

Posted by Hannah Thompson at 12:08