Shouting at the (Blind) Ref 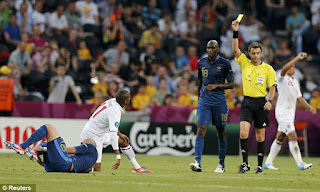 I love watching football on TV even though I agree with Tim Unwin that sport can sometimes sound better on the radio. In the past I have watched matches in bars, cafes, student common rooms and hotels but this year I expect to be mostly watching from the comfort of my sofa.  My boys are now old enough to watch with me and are taking a keen interest in my wall chart. Yesterday I subjected them to my armchair commentary during the England-France game. After abandoning an attempt to explain to them why I was giggling every time the English player Wellbeck was mentioned (a joke only really suitable for fellow French literature enthusiasts....), I had to try and tell them why I thought that the referee was failing to properly acknowledge the fouls inflicted on the English by the French. In the heat of the moment my first response was "Because he's blind". Luckily, and much to my husand's amusement, I managed to stop myself just before these words left my mouth. Instead I explained that the referee cannot possibly spot every misdemeanour which takes place on the pitch: after all he only has one pair of eyes whereas we have the benefit of many TV cameras zooming in on the action.

Once the boys had accepted this explanation, I began to wonder at my original response. What does it mean when someone who identifies herself as 'blind', someone who is working hard to be proud of her blindness, uses this word as a term of abuse? I'd like to think that the years I've spent listening to football commentary have left me with a stock of easy and un-thought-through phrases to trot out on such occasions. Perhaps I also talk about 'games of two halves' and 'tired legs' without even noticing.

But I worry that my response reveals something more sinister. What if society is so ready to accept the negativity of blindness that even the blind find themselves using it as an insult? How can I hope to celebrate my blindness, let alone encourage others to do the same, when the emotion of a football match triggers this kind of mindless comment? Football fans are not known for the subtlety of their insults. Indeed this particular tournament has already been marred by accusations of racist language. I am delighted that racism at football matches has at last been identified as an issue and is being addressed. I wonder when (or rather, if) the misuse of the language of disability will be subjected to the same kind of scrutiny. I for one am now going to be paying a lot more attention to the kind of language I use when watching football.
Posted by Hannah Thompson at 09:13