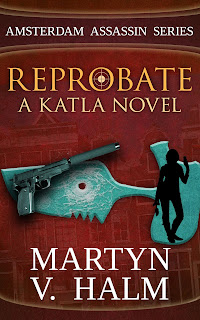 It is notoriously difficult for non-blind writers to depict blind characters in fiction. Although anyone can close their eyes and imagine blindness for a few minutes, living in a world where sight has lost its meaning is incredibly hard to imagine. For this reason, blind characters in fiction are relatively rare. Where they do exist, they are either secondary and therefore always described from someone else's point of view (as in Adrian Mole) or evil and not described sympathetically at all (as in Ratburger). Like Star Gazing which I blogged about last April, Reprobate is a novel of shared viewpoints, in which a blind character, Bram, plays a crucial role.

When the reader first encounters Bram, it is easy to mistakenly think that he is nothing but a fascinating plot device. We initially encounter him just after assassin Katla has finished a job. When he interrupts her as she is cleaning up the crime scene, her first instinct is to kill him, as she normally would an 'additional' who might later be able to place her at the scene. But when Katla realises Bram is blind she decides to spare him. Her reasoning is that he poses no threat to her because he will never be able to make a positive identification of her.

Katla, like most sighted people, imagines at first that a world without sight is a world of darkness and confusion. But Bram is not the kind of passive, low-functioning blind person who is frequently found in fictional representations. Unlike the blind man in Amelie, for example, he is always well aware of his environment. He picks up clues from the sounds, smells and atmospheric conditions he senses and is never described as having a lesser experience of life because of his blindness. This is wonderfully demonstrated in the scenes, such as the episode in the diner at the beginning of the 'Luncheonette' chapter, which are told through his perspective. In these scenes, the author focuses only on what Bram can hear, touch and sense. But the reader nonetheless gains a complete understanding of the scene. In fact until you look closely at the language of the scene, you probably won't even notice the absence of visual clues. Bram's presence in the novel, and the part he takes in its narration, brilliantly shows that sight is not essential to a full and happy existence. Bram is clever, funny, sexy and sporty. In fact very soon the story becomes so gripping that the fact of his blindness would easily be forgotten if it weren't for the detail with which the narrator describes the practicalities of his life.

If you want to know what it is like to be a blind person living in a sighted world, then you should read this book, especially if you enjoy complex and multi-layered thrillers with unexpected twists and a truly triumphant ending.
Posted by Hannah Thompson at 16:12

Email ThisBlogThis!Share to TwitterShare to FacebookShare to Pinterest
Labels: blindness, blindness in fiction, kindle, the blind