Guide Dogs for the Blind 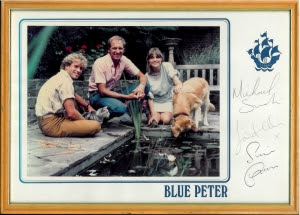 One of the most interesting papers I heard at the recent History of Blindness conference in Paris, was Dr Monika Baar's fascinating and thought-provoking presentation: 'Guide Dogs for the Blind: A Transnational History'.

Baar's presentation made me wonder about the unintended consequences of Blue Peter's work with Guide Dogs for the Blind. There is no doubt that guide dogs have changed the lives of thousands of blind and partially sighted people. Indeed I met several blind people in Paris whose mobility and Independence have improved thanks to their partnership with their dog. But the image of blindness conveyed by Guide Dogs for the Blind is far from positive. And this is in danger of having an ironically detrimental effect on the lives of the very people the association is hoping to help. As the sentimental music and condescending tone of this promotional video suggest, blindness is presented here as a pitiful, even tragic state which leads to depression, isolation and misery. Sighted children (and adults) who are exposed to such material might be forgiven for thinking of the blind as a sub-group of needy and pitiful individuals. But none of the dogless blind I met in Paris were anything like these stereotypical images. They were classic conference delegates: clever, funny, disorganised, sociable, irreverent and always up for a drink. Guide dogs certainly have their uses, but they also have their limitations. One blind delegate, an experienced and enthusiastic international traveller from the States, explained to me that he thought having a dog would limit his Independence because 'it would be like travelling with a clingy three-year-old child'.

I can understand why Guide Dogs for the Blind are the most successful UK Disability charity. Their Labradors are unfailingly photogenic and it feels both easy and good to give money to such an aesthetically pleasing cause. And on one level I don't blame them for using whatever material they can to get money for their cause. But if their mission really is about improving the lives of the blind and partially sighted, perhaps they need to think again about the way they represent blindness. But in the UK, generations of children have grown up thinking of blindness as a tragic condition which only a beautiful dog can remedy.
Posted by Hannah Thompson at 13:30