David Bolt; The Metanarrative of Blindness (2014) 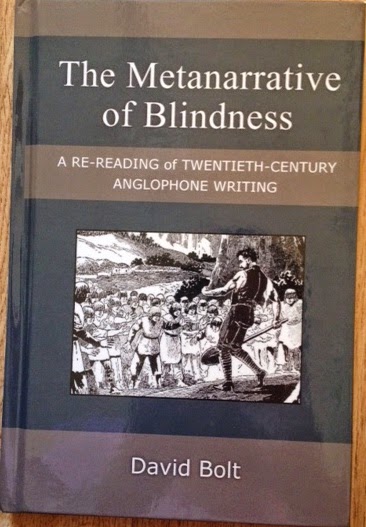 The image shows a hardback copy of David Bolt's The Metanarrative of Blindness:
A Re-Reading of Twentieth-Century Anglophone Literature
(Ann Arbor: Michigan U.P., 2014)


There is nothing quite like the combination of excitement and fear an academic experiences when they come across a book which is closely related to their current research. This is exactly how I felt when I heard about David Bolt's new book, The Metanarrative of Blindness. I was excited by the potential for new discoveries, discussions and connections which this book would provide, yet I was terrified that David's work would somehow duplicate or pre-empt what I am trying to say.

I am pleased to say that by the time I finished reading the book, my fears had vanished and my excitement had more than doubled. This is a fascinating and readable exploration of how a range of fictional and autobiographical texts represent ‘blindness’ and ‘the blind’. Its originality lies not so much in David’s discussions of the texts themselves, but more in his argument that fictional representations of blindness have created a set of myths and stereotypes of blindness which dictate how society treats the blind. Indeed David even makes the important point that blind people themselves have also been unwittingly influenced by such images. David’s book is different from much traditional literary criticism because it constantly compares his own experience of being blind with fictional representations of blindness in order to show the gap between reality and fiction.

Aside from this overarching argument, there are many useful elements in the book and I will certainly be using it with students in my new undergraduate course ‘Blindness and Vision in French Culture’ which I am teaching at Royal Holloway from September .The Introduction provides an excellent summary of the major trends and tensions in Disability Studies in general, with references to authorities including Goffmann, Garland-Thomson, McRuer, Davis, Mitchell and Snyder, and Chapter One explores the politics of blindness in particular. Here, David very carefully explains his somewhat controversial choice of terminology. Unlike many blind activists and scholars, including myself, David rejects the terms ‘the blind’ and ‘blind people’, preferring to use ‘those of us who have or do not have a visual impairment’. There are good reasons for him to do this, not least because his decision highlights the very problems of terminology he is trying to avoid, but I find his choice of words clumsy and at first I was frustrated by how much it disrupted the flow of both his prose and his arguments. Like Georgina Kleege in Sight Unseen, I prefer to proudly reclaim terms like ‘blind’ and ‘partially blind’ as celebrations of a state of sightlessness usually considered negative. But David’s explanation of the reasons behind his choice do make sense. In fact they do a great job of revealing the advantages and disadvantages of the medical, individual and radical social models of disability, the potential pitfalls (or possibilities) of political correctness and the power of even apparently neutral language to influence and (mis)inform. Like myself, David is speaking at the Society of Disability Studies conference in Minneapolis next month: I'm looking forward to discussing his choice of terminology with him and others at the event.

In the rest of the book, David explains how three interrelated neologisms - ‘ocularnormativsm’, ‘ocularcentrism’ and ‘opthalmocentrism’ - both belong to and persist in creating a 'metanarrative of blindness', in other words, 'the story in relation to which those of us who have visual impairments often find ourselves defined, an overriding narrative that seems to displace agency' (p. 10). David's analysis of a wide range of texts shows the persistent presence of a number of myths of blindness which I have also found in some of my nineteenth-century French texts. The ‘seeing-knowing metaphor’ (p. 18), the ‘blindness-darkness synonymy’ (p. 21) and the odd idea that people are either fully blind or fully sighted (pp. 69-70), are particularly widespread. In Chapter Two he shows how the use of labels such as ‘the blind man’ and ‘the blind girl’, creates a belief in blindness-as-difference which sets blind characters apart from the (implicitly sighted) reader. Chapters Three and Four both deal with a range of misconceptions surrounding blindness and sexuality. One of the most interesting arguments in Chapter Three is the discussion of how the recurrent infantilisation of blind characters frequently rests on the misguided assumption that independence is more valuable than dependency. By challenging the independence-dependency hierarchical binary which underpins traditional notions of rehabilitation, lifestyle and progress, David is able to criticise dominant medical and social discourses of disability. This is just one example of how readings of fictional representations of disability can help to problematise current ways of thinking. This is something which I hope my own analyses of blindness in fiction have also been doing.

In the following chapter, David criticises positive stereotyping by showing how 'more than being inaccurate, cultural representations of extraordinary senses serve, at best, to render magical the talent and achievements of people who have visual impairments and, at worst, to justify the ascription of various animal-like characteristics' (p. 67). Chapter Five is an insightful survey of blindness’s association with contagion in science-fiction writing (including readings of key works like H. G. Wells' 'The Country of the Blind', John Wyndham's The Day of the Triffids and José Saramago's Blindness) in which David challenges the recent tendency to read references to successful blind characters as a celebration of disability. Instead he argues that stories featuring blind communities tend to emphasise the differences between the blind and the sighted which in turn suggest that ‘the blind' are somehow inherently different from the sighted. Chapter Six uses the work of French philosopher Michel Foucault to criticise the hierarchical binary relationship between the sighted gazer and the blind object of the gaze whilst Chapter Seven calls the blindness-as-tragedy myth into question.

David’s discussion of a wide range of twentieth-century texts represents an impressive survey of representations of blindness and the blind. I find him most convincing when he compares his discussions of fictional depictions with the lived experience of the blind and the partially blind: his use of examples from his own life, as well as extracts from the autobiographical writings of Georgina Kleege, Stephen Kuusisto and John Hull is particularly informative and should teach sighted readers much about their own misconceptions of blindness. This emphasis on lived experience is important because it demonstrates that the 'metanarrative of blindness' occurs in society as well as – or perhaps even more so than - in fictional representations. David is an accomplished social commentator who uses evidence from twentieth-century fiction to demonstrate how 'the blind' are perceived in modern society.

The main problem I have with David’s book does not in fact have anything to do with blindness as such and it feels a little churlish to mention it here, particularly as it is related to my (in fact unfounded) worries about overlap with my own work. I find the subtitle of the book, ‘A Re-reading of Twentieth-Century Anglophone Texts’ misleading, perhaps even insulting. Whilst the majority of his texts were written in English, David also pays sustained attention to several French authors – Roland Barthes, Georges Perec, Jean-Paul Sartre, André Gide and Jacques Derrida - whose works were neither originally written nor published in English. I am worried by this refusal to acknowledge the linguistic and cultural identities of these texts: not only does this negate the huge influence that French literature and culture has had on the history of representations of blindness, it also reflects a wider tendency amongst anglophone academics, publishers and readers to ‘claim’ such texts for the dominant Anglo-American canon when it suits them to do so. I am pretty sure that my French friends and colleagues would be outraged to see French classics like La symphonie pastorale and Histoire de l’oeil described as ‘anglophone’!

This niggle notwithstanding, this book is a crucial contribution to 'Blindness Studies' and comes very highly recommended.