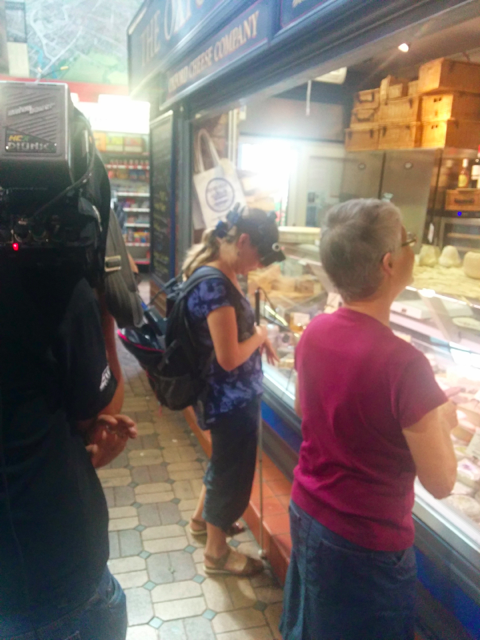 This image shows me shopping at the Oxford Cheese Shop in the indoor market. I am in the middle of the picture, gazing down at a mouth-watering display of goat's cheese (my favourites!) I am wearing a chunky black headset with some glasses mounted on the front. I am also wearing a black ruck sack (containing the laptop which is running the cameras on the glasses). To my right is another customer and behind me you can see the television camera which was filming me.

Last August I began working with a research team at Oxford University who are developing some 'smart glasses' which will provide additional information for partially blind users. As I explain here, I was hugely impressed with this new way of navigating and very excited that I could soon be walking around confidently (especially at night, in dappled shade, or in bright sunshine) without bumping into rubbish bins, bollards or other pedestrians.

This week I met up with Dr Stephen Hicks and his team again (along with a film crew from CBS) to discover how the latest version of the glasses might help me run some errands in one of Oxford's busiest and most visually confusing venues, the Covered Market.

I was astonished by the progress that Stephen's team have made in the past year. When I first wore the glasses nine months ago, I felt like I was in a science fiction film. This time it was more like being the heroine in Aha's iconic 1984 Take On Me video. When I put the glasses on I was plunged into an animated world where objects' outlines shimmered wonderfully in black and white.

I have always loved French cheese but tend to find market shopping frustrating. Labels and prices are impossible to see and I can never even tell which products the cheese-monger is pointing to when I ask for advice. I was eager to see if the experience would be any different in my 'smart glasses'.

The first thing that struck me as I looked at the cheeses on display was that I could, for the first time ever, distinguish their different shapes and sizes. My favourite goat's cheese, Crottin de Chavignol, has a distinctive cylindrical shape and I was delighted to discover three lovely Chavignols near the front of the display, all nicely highlighted by the glasses' clever use of dark and light: 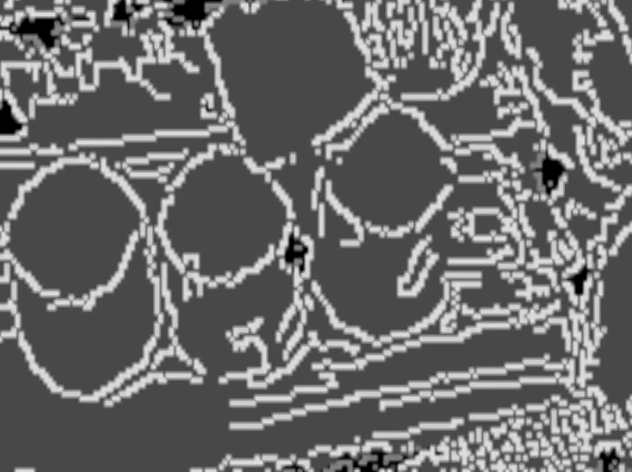 This image is a screen-shot taken whilst I was using the glasses to choose my cheeses. Several white lines demarcate shapes on a black background. In the centre of the image, three cylindrical shapes - which I correctly identified as Crottins de Chavignol - are clearly visible.

After making my first purchase, I asked the cheese-monger's advice about another goat's cheese which would nicely complement the first. He recommended a milder one after tasting a sliver, I decided to follow his advice. Unlike Chavignol, this one was not sold in individual portions so I had to decide how much I wanted. Specifying this kind of detail has always been a challenge for me. Usually, when cheese-mongers hold up a piece of cheese, or make a 'bigger or smaller' kind of gesture with their hands, I can see neither the cheese itself, nor their hands. I generally just take what they are offering without being able to tell how much cheese I have in fact bought until I get it home. With the glasses, however, I could very clearly see the outline of the cheese-monger's hands as he held up a piece of Chabichou. I was confidently able to tell him that this was exactly the amount I wanted without running the risk of going home with far too much cheese (or, worse still, not enough!). After the glasses had also helped me check my change, I reluctantly handed them back to Stephen, I headed home with my cheese, satisfied, for perhaps the first time in my life, that I had made some informed shopping decisions based not only on help and advice from others, but also on what I confidently knew was in front of me. 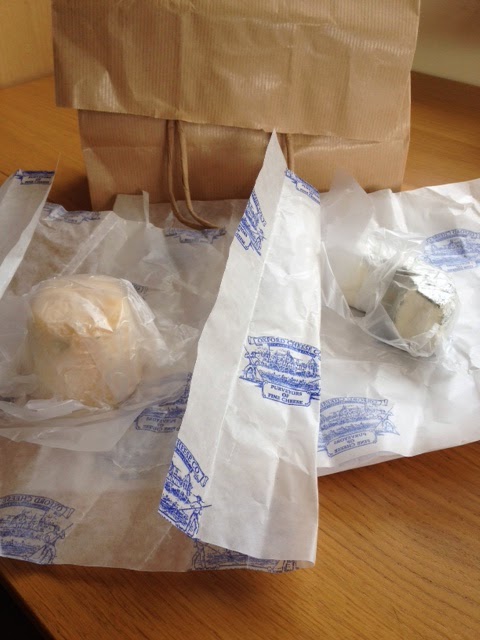 This image shows my purchases with the
distinctive cylindrical Chavignol on the left
. Bon appetit!

Posted by Hannah Thompson at 12:41