Too Big to Feel 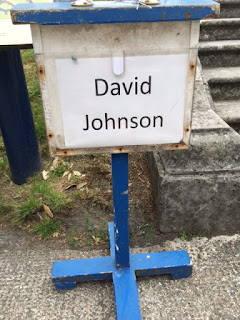 This image shows a sign with David Johnson's name printed on it.


Blind Creations, the international conference and micro-arts festival I am organising with Vanessa Warne, is only two weeks away. Yesterday I was delighted that David Johnson, one of the conference's exhibiting artists, installed his giant outdoor art work on Royal Holloway's beautiful campus. 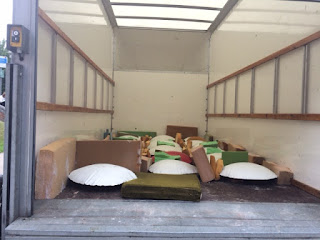 This image shows David's concrete domes nestling amidst foam blocks in the back of the van he used to get them from his studio to campus.


Once David and his friend James had arrived on campus, their first job was to check that the domes had survived the journey. They then began the painstaking task of using string and tent pegs to mark out the exhibition space. 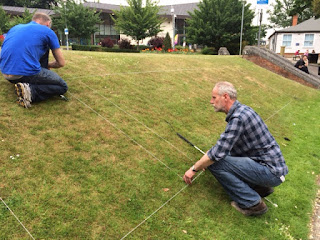 The installation is in fact a common expression written in Grade 2 (contracted) Braille. So David needed to divide the grassy slope into 7 sections, each representing a single Braille cell. Each cell was separated by a small gap. The measurements had to be precise so that the domes were evenly spaced. 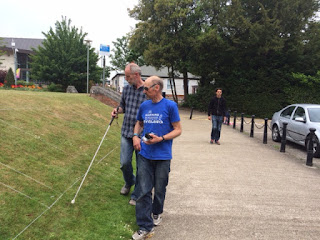 This image shows James guiding David along the path next to the grassy slope. David is using his white cane to check that the slope has been properly divided into equally sized cells.

Once David was happy that the string was in the right place, it was time to start installing the domes. David and James unloaded and placed each dome one at a time. They wored backwards, starting with the expression's final Braille cell. 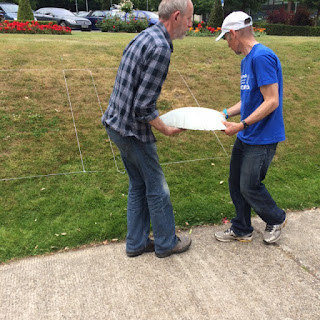 This image shows David and James carefully carrying the first dome along the path. David cast each dome himself in concrete and each weights around 30 kilos.

It was crucial that each dome was placed in exactly the right position so that the symmetry of the Braille was maintained. David and James took a lot of time to ease each dome into place. 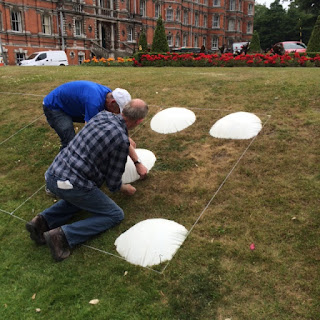 This image shows David and James carefully placing the domes on the grassy slope. They are using the pegs and string to ensure the domes are positioned in place. 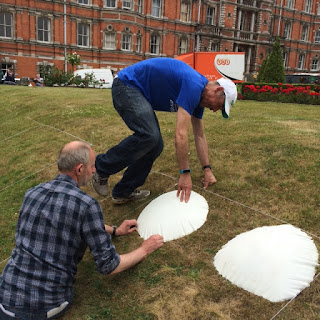 T
This image is a close-up shot of David and James placing one of the domes in position 1 of a ginat imaginary Braille cell.

Once David and James had placed all 18 domes in position, they removed the string to reveal the final installation. 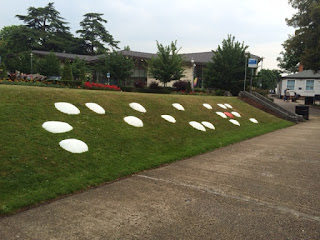 This image shows the finished installation with the College's Windsor Building in the background.... and the video below, taken by my friend Ruth, pans across the whole installation from left to right.

Posted by Hannah Thompson at 12:44