Best and Most Beautiful Things 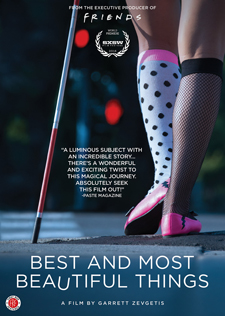 This image is the cover of the DVD: it is a shot of Michelle's legs waiting at a pedestrian crossing in the dark. Her white cane is also shown. She is wearing bright pink ballet pumps and mismatched knee-high socks.

In 2013 I was contacted about a crowd sourcing project to fund a documentary about a legally blind student graduating from Perkins School for the Blind. I was pleased to make a donation and a few days ago I received my Kickstarter reward: a free download of Best and Most Beautiful Things. The film, which was released to much critical acclaim, aired on PBS yesterday and is now available to buy as an iTunes download or a DVD with Audio Description.

Before I watched the film, I was worried that it would be yet another sentimental, 'triumph over tragedy' story about a blind girl overcoming adversity. But knowing that it won 'Best in Fest' at the 2016 International Disability Film Festival 'Superfest' reassured me that I was about to watch a creative and critical depiction of blindness.

'Best and Most Beautiful Things' is indeed a thought-provoking film about blindness. But rather than trying to teach its audience about life with blindness, the film simply shows Michelle going about her daily life. This is a hugely effective way of sharing Michelle's experience without depicting her as victim, object or other. We see her magnifying text on her computer, holding print close to her face and using her white cane. We also see her roller-skating, singing, shopping, getting dressed and skyping. Blindness is part of Michelle's normal. So as we watch the film it becomes part of ours. The film's cinematography helps us share Michelle's way of seeing. Extreme close-ups replicate Michelle's proximity with everything she sees whilst out-of-focus, decentred or jumpy shots echo the world beyond Michelle's field of vision. There are also moments which remind us of the disadvantages and advantages of blindness. I have often experienced Michelle's tearful frustration when fruitlessly searching for a lost object. But on the other hand, her karaoke singing is made more beautiful and more fluent because she is obliged to memorise the lyrics of every song she sings. 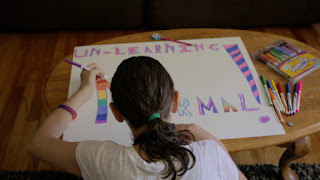 This still from the film shows Michelle colouring in a large home-made poster which says 'Unlearning Normal!' in rainbow letters.

In 'Best and Most Beautiful Things' Michelle urges us to 'unlearn normal'. The film shows Michelle's refusal to conform to any of the stereotypes her parents, teachers and acquaintances might have once associated with blindness. Her provocative re-appropriation of the myth of the infantile blind girl is particularly interesting. She challenges some people's tendency to overprotect or talk down to blind people, particularly blind women, by both her proud love of dolls and her discovery and celebration of submissive BDSM age-play. Michelle's sex-positive, non-binary stance is a crucial part of the film's challenge to normal. As the director Garrett Zevgetis puts it in a Q and A for PBS:

Our collective ideas about “normal” can be downright dangerous and thus must consistently be challenged. #HackNormal: The most dangerous and deep rooted normality might be hegemonic masculinity.

We all have a tendency to make assumptions about other people based on our own preconceptions. 'Best and Most Beautiful Things' urges us to rethink how we see others. It is a powerful, touching, yet resolutely unsentimental call for a more tolerant, imaginative and creative society where everyone is valued for who they are.

Watch it.
Posted by Hannah Thompson at 13:00