Blindness at the Donmar Warehouse 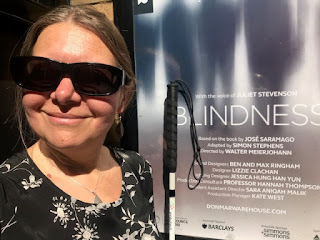 Image description: a photo of my standing to the right of a poster for the Donmar Warehouse's production of BLINDNESS. I am smiling broadly. Dark glasses cover my eyes and the top of my white cane stands next to me. On the poster, the cast and creatives are listed. My name appears in the list alongside the description 'Production Consultant'.

When I heard from my friends at VocalEyes that the Donmar Warehouse was planning a production of Saramago's problematic novel Blindness my heart sank. The all-too-familiar alarm bells started ringing in my mind. 'Will this be yet another sighted peoples' depiction of 'blindness as tragedy'? I wondered. 'How dare sighted people tell us what our blindness feels like!' I fumed. I worried about whether this supposedly 'non-visual' installation would turn into a wrong-headed simulation of blindness which might have the dangerous effect of further stigmatizing blind and partially blind people.

Luckily, the Donmar team were very receptive to my concerns. After a Zoom meeting with them, I was appointed 'Production Consultant' for the installation. My job? To help them understand why many blind and partially blind people find Saramago's portrayal of blindness so offensive, and to work with them to find ways of using the production to think about blindness in different - perhaps more positive - ways.

Saramago's novel depicts a world where sudden, contagious blindness leads to the disintegration of society. As people go blind, they lose their dignity: they become violent, sexually aggressive and ruthless and the world descends into chaos. Eventually, one group of blind people are saved by the only sighted person left. She finds them food, gives them shelter and makes them clean again. At first I wasn't sure there was anything the Donmar would be able to do to redeem this unremittingly tragic depiction of blindness. The production is an adaptation of the novel, so it needs to use the novel's words and actions. But then I realized that that potential of the piece lies not in its content, but in the ways this content is presented.

Lockdown has made traditional theatre impossible because live actor performances are not allowed. So the Donmar created a socially-distanced sound installation with binaural audio recorded in advance. Aside from some powerful lighting effects (which are audio-described at every performance), the production is entirely reliant on our sense of hearing. As such, it is compelling evidence that we do not need our sense of sight to enjoy the theatre. By asking non-blind people to temporarily relinquish their reliance on visual sources of information and focus instead on their often-neglected listening skills, the production performs a re-calibration of the 'hierarchy of the senses' where vision is dislodged from its traditional place at the top. The most powerful moment in the show is when the audience is plunged into absolute darkness. In this instant we become completely reliant on the beguiling voice of Juliet Stevenson's narrator, and we strain our ears to capture every sound of her presence. We are suddenly alone, with the intimate whispers of the character as our only guide. I did not find this plunge into the dark frightening, although I suspect some non-blind people did. I found it liberating. Finally I could devote my whole being to listening without worrying that I was missing some of the visual information which is so highly prized by my non-blind peers. I could have sat in the dark all day listening to the mesmerizing drama unfolding around me.

But light did return, and the audience gradually became visible once more. I expect most people were relieved at this return of daylight. I felt oddly disappointed as I was forced back into the sighted world I have such a problematic relationship with.

For more on the depiction of blindness in the installation, as well as my thoughts on blindness gain, reading blind and trying to 'pass' as sighted, listen to the podcast recorded by me and writer Simon Stephens to accompany the production.

Posted by Hannah Thompson at 11:34