Depictions of blindness are surprisingly common in film. But they almost always have a symbolic function. If cinema is a celebration of the visual, then blindness represents its opposite. It is a resoundingly negative state which stands for lack (usually of insight or understanding), marginality, exclusion.

At first glance, this indeed seems to be the case with Leos Carax's 1991 film Les Amants du Pont-Neuf. Michele (Juliette Binoche) is losing her sight. The apparently incurable deterioration of her vision, and a failed relationship (whose end may or may not be related to her sight loss) have led to her living rough on the streets of Paris. As Michele's sight worsens, so does her physical state: she becomes dirtier, shabbier and more reliant on her vagrant boyfriend Alex (Denis Lavant). 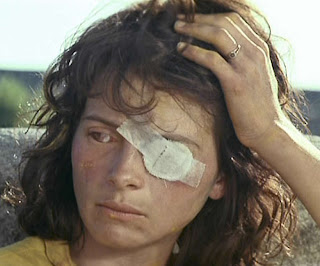 Alex uses Michele's failing sight against her to keep her with him on the bridge. When a cure is found for her condition, and radio stations start broadcasting appeals about her, Alex deliberately moves the radio so that she will accidently knock it into the Seine. Michele angrily blames her worsening sight for this mishap: the viewer, who, like Alex, can see more than Michele, knows otherwise. Michele's blindness is transforming her into a lost and dependant victim who relies heavily on her selfish boyfriend. 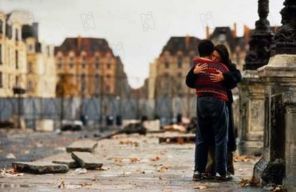 If Michele's sight loss is equated with misery and abjection, the regaining of her vision marks her reinsertion into bourgeois society: after her operation Michele is prettier, richer, happier and once again in a successful long-term relationship - this time with her saviour-eye surgeon. 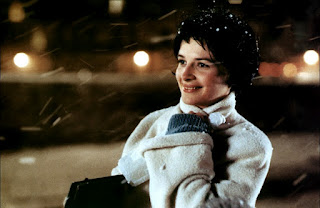 If the film had ended there it would be easy to criticise it for continuing the tradition of negative filmic portrayals of blindness. Blindness is something to be cured, eliminated, overcome. And what could be more natural than marrying the man who gives you back the gift of sight?  But when Michele meets Alex on the bridge at the end of the film, she throws away her stable middle-class lifestyle in favour of an unknown future with him. We cannot escape the uncomfortable fact that Michele's life is better when her blindness is eliminated. But the film's surprisingly impulsive ending does encourage us to question the assumption that regaining her sight will solve all Michele's problems.

This potentially positive (or at least not necessarily negative) depiction of blindness is substantiated by the film's interest in how and what Michele sees. It is rare to find films which show the viewer the world as a blind or partially blind person sees it. No cinema viewer wants to look at a blank screen or a series of blurry and fragmented images for any length of time. And film makers (for obvious and understandable reasons), are deeply invested in the primacy and the perfection of the visual. But it is precisely Carax's interest in the visual, and in what happens when the visual becomes impaired, which allows him to show us the world from Michele's point of view. One example of this is the scene in which Michele watches Alex performing his fire breathing display. Michele's eyes are dazzled and hurt by the sudden irruptions of bright flames into the night sky. Not only do we see her reactions to this discomfort, we are also shown, through the jerky camera movements and disorienting effect of the flames, what it might be like to see with her eyes.

My favourite example of Carax's clever approach to Michele's sight comes in the scene after she may or may not have shot her ex-lover Julien in the eye because he won't let her paint him one last time. It is Bastille Day 1989 and the streets of Paris are lined with spectators waiting for the traditional 14 July military parade. As Michele runs back to the bridge we are shown a military helicopter flying overhead which transforms into a flock of birds and then back into a whole squadron of helicopters. I had always read this scene (ignore the dubbing: dialogue is not important here) as a manifestation of Michele's guilt. If she has indeed just murdered Julien, she is imagining that she is already being pursued by the police, seeing threat where there is none.

But recently, I have realised that this scene demonstrates a crucial way that the partially blind relate to the world: instead of immediately knowing what things are, I see a vague shape and then use a mixture of guesswork, context and intuition to work out what it probably is. I do this instantaneously, almost without noticing, and most of the time I am right. If I see a tall dark shape standing on the pavement, I usually think it is a person. As I approach I get ready to give hm or her a friendly smile, until I realise it is in fact a wheelie bin. If I notice a small, round, black object in the bath I always assume it is a spider. I sumon my husband to rescue me from it and then try to laugh at myself when he points out that it is just a clump of hair. Michele sees some fast moving, dark specs in the sky. The context of Bastille Day, perhaps coupled with her guilt, makes her think they are helicopters. But the viewer thinks that they are more likely a flock of startled pigeons (especially as the traditional flight-past has already been shown in a previous scene).

The beauty of this scene lies in the fact that both images are allowed to co-exist. Through the way they merge into each other Carax asks us to think about how different people see. He reminds us that seeing is not just about looking, it is also (maybe mostly) about interpreting. This is certainly the case in the cinema. But Carax shows that it is also the case in life. Filmakers who, unlike Carax, simply perpetuate the tired stereotypes of blindness are surely missing the whole point of such a visual medium. Imagine how different Amelie would be if the world was (also) seen through the blind man's eyes.
Posted by Hannah Thompson at 12:39

Email ThisBlogThis!Share to TwitterShare to FacebookShare to Pinterest
Labels: blindness in film