I was very sad to hear the news of David Rathband's death on the radio this morning. 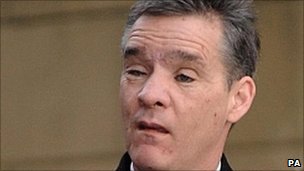 Rathband was in the public eye since the day he was shot and blinded by Moat and he had to undertake a much scrutinised journey to adapt to life as a blind person. He must have thought that he was always being watched, that he was forever on display. The very fact of his own sight loss transformed him into an object of public scrutiny. The lexicon of bravery which inevitably surrounded his situation transformed his everyday life into a fight, a struggle, a battle. This insistence by society that blindness is something to be overcome, defeated, triumphed over is deeply unhelpful. It posits blindness as an insurmountable obstacle, something which needs to be 'got over'. If you listen to the interview with Peter White on the radio this morning, you will see how the repeated references to 'coping' and 'adjusting' stands out. Isn't there a way of seeing blindness is a more positive light? I do not want to deny the feelings of loss, mourning, bereavement that follow sight loss, especially when that loss is sudden and violently unjust. I have only very recently begun to come to terms with my own partial blindness, which I have been living with for 38 years. I still get inexplicably angry and frustrated when I spill a cup of tea or stumble over a step. I can't even begin to imagine what it must feel like to have your sight ripped away from you in such a traumatic manner.

But at least part of David Rathban's feelings of grieving came from society's insistence on the primacy of sight. It doesn't have to be that way. We have 5 senses. Why privilege the visual to such an extent? How have we contrived to create a world in which a blind person doesn't feel able to live?

I'd like to imagine a world in which touch and taste are no longer seen as second-best, back-up senses. What if children were taught to read braille at school along with print? What if the feel of clothes mattered as much as their appearance? What if we cared as much about how food tasted as we do about how it looks? What if the sound of a person's voice attracted as much attention as their appearance? Somehow our society has become a place which refuses to look beyond the visual. I wonder if PC David Rathband's death will shock us into reappraising our oculocentrism. I doubt it. But at the very least, I hope it doesn't send the far more damaging message that sight loss is destructive and ultimately life-destroying.

(March 25th: I have just come across this very funny and well-written blog post which brilliantly captures the general feeling that blindness is a hurdle to be overcome.)
Posted by Hannah Thompson at 10:33