Changing the Face of Disfigurement 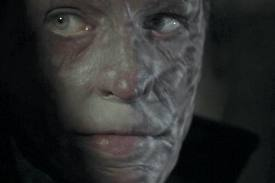 Yesterday I saw a cinema advert that will stay with me longer than the film I watched afterwards. A man with a badly scarred face is sitting in a car. Outside it is dark and rainy. He is watching a house. A pretty woman enters the house. She is alone. She goes upstairs and starts cooking dinner. The man in the car can see her through the window. She doesn't know he is watching her. The music she is listening to on the radio is the same music that the man is listening to in the car. She pours herself a glass of red wine. The sound of the door knocker startles her. She goes downstairs and opens the door cautiously. She sees the man with the badly scarred face and stares at him in horror. If you want to see what happens next, watch the advert here.

What did you think was going to happen next? This ad is part of campaign for face equality on film. it is fighting against the ease with which the film industry uses facial disfigurement to represent evil. When a character with a disfigured face appears on screen, he or she is almost always a baddie. Cinema is incredibly lazy in the ways  it uses bodily appearance. Anything which departs from the perfect Hollywood body generally becomes part of the character's essence. But facial disfigurement is only skin deep: it doesn't change the way a person loves, laughs or thinks. How can the facially disfigured expect to be treated equally in the street, at school,  at work, or on the beach when there are no positive images of disfigurement at the cinema?


As the Face Equality on Film website points out: "these long-held and inaccurate beliefs are completely at odds with the reality for most people with disfigurements - who are lawyers, teachers, comedians, DIY lovers, parents, feisty teenagers, doting grandparents. They worry about their children, love cooking programmes, have affairs, worry about the rent, dye their hair, hate commuting - just as other characters do who are portrayed on the big screen."

This advert was shown at the cinema. But perhaps it should also be shown behind the scenes. For it is only when casting directors, producers and writers stop obsessing over stereotypical ideas of beauty that the cinema-going public will have the chance to see disfigurement presented in a more positive light.

Posted by Hannah Thompson at 11:59