The Paralympic Opening Ceremony (both good and bad)

Something changed last night. It became cool to be disabled. 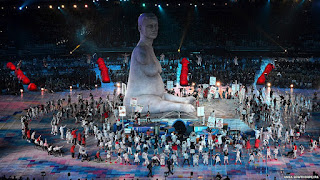 The Opening Ceremony of the 2012 Paralympic Games was a powerfully moving celebration of the human body in all its forms. It used music, technology and a re-writing of Shakespeare's Tempest to dare anyone who thinks disability is about tragedy, pity and self-loathing to 'be curious' and embrace the differences which make us who we are.  A multimedia evocation of the complicated multiplicity of the universe, represented by the iconic figure of Stephen Hawkin, called for a radical rethinking of the way disability is represented and understood. It used the theme of 'Enlightenment' to demand a more enlightened approach to disability, an approach which does away with outmoded notions of beauty, perfection and wholeness. 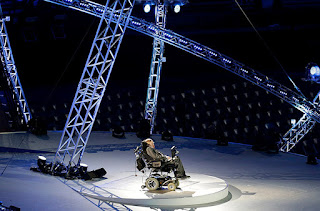 British physicist, Professor Stephen Hawking speaking
at the opening ceremony
Lefteris Pitarakis/AP
Some of the performers encountered on stage were startling at first sight. The media's obsession with perfection has left us unused to wheelchair dancers or limbless bodies. But the power of the ceremony lay precisely in the way that this initial shock was transformed not into horror, but into wonder and pride. There was a real danger that this ceremony might become a kind of twenty-first century freakshow, a parade of extraordinary bodies to be stared at from a distance.  Instead it was a joyous celebration of the power of disability. 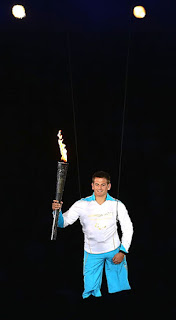 The Paralympic flame is carried by Royal Marine Joe Townsend
into the stadium on a zip wire
Scott Heavey/Getty Images
Yet despite its celebration of the differences which make up the world, the ceremony still emphasised  the centrality of sight to our understanding of it. Miranda was told to look, to read, to see. The giant eye, the lack of braille reading during the book scenes and even the theme of Enlightenment itself all suggested that a consideration of blindness was oddly absent from proceedings.
It feels churlish criticising an event which has undoubtedly done more for disability awareness both on and off the sportsfield than any other.  But these odd incongruities remind us of the hold the sense of sight has over us. Most people cannot even conceive of a world without it.
I have had my doubts about the ethics of holding a separate Paralympic Games but after last night's ceremony (and my quibbles notwithstanding) I am convinced that Paralympic Sport deserves both its own Games and its own Opening Ceremony. This did not feel like a second-best, or second-rate echo of the Olympic Opening Ceremony. It is the second, and most important, act in a drama which has captivated London and the World.
Posted by Hannah Thompson at 14:50