My Perfect Day at the Paralympics 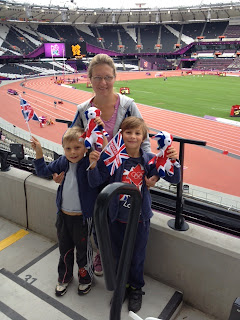 Waiting for the athletics to start at the Olympic Stadium
I spent Saturday 1st September at the London 2012 Paralympic Games with my husband and our two sons. I was expecting an informative and interesting glimpse into disabled sport: it turned into an amazingly moving and hugely exhilarating adventure.

The fun started as soon as we got off the Jubilee Line in Stratford. The crowds pouring into the Olympic Park were good-natured and exuberant and we were soon captivated by the atmosphere. The boys especially were made really welcome: their cuddly GB Mandervilles (see above) were petted by volunteer after volunteer and they loved high-fiving the giant pointy fingers directing us into the stadium. My white cane and I don't usually like crowds but I found navigation relatively easy thanks to the numbers of helpful volunteers and the mindfulness of other spectators.

It felt both comforting and liberating to be in a crowd made up of a healthy mix of disabled and non-disabled sports fans. Usually my cane attracts stares and sideways glances but here I blended in so much better than usual. It felt great to be carrying a cane and yet not be the centre of attention.  I have never felt prouder to be using a white cane than during the Paralympics.

So why was it such an amazing day? Here are my top 10 moments (in roughly chronological order):