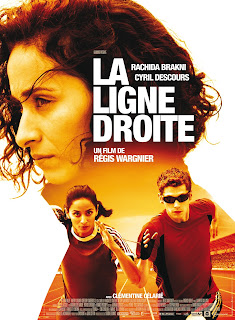 Régis Wargnier's 2011 film La Ligne droite is a thoughtful and sensitive portrayal of how young athlete Yannick (Cyril Descours) learns to run with a guide after losing his sight in a car accident.
It is extremely rare to find positive responses to blindness in film. As my comments on Amélie and Les Amants du Pont Neuf demonstrate, blind characters are most often portrayed as victims to be pitied, looked-after and eventually saved.
In this film, Yannick's over-protective mother embodies the patronising attitude illustrated in Jeunet's and Carax's depictions. She treats Yannick like a sick child, denying him any autonomy and refusing to let him take responsibility for his own actions. More despicably still, she uses his blindness to trick him into unknowingly becoming complicit in her kindnesses: in one scene she lies about the dice he has thrown so that he can win the game they are playing; in another she secretly pays a prostitute to seduce him.  Wargnier's depiction of these duplicitous actions offers us an extremely well-observed account of how those who do not understand disability treat the disabled. Yannick's mother means well and thinks she is acting kindly. But her behaviour is in danger of imprisoning Yannick in a muted world of caution and care.
Unlike Carax and Jeunet, Wargnier embeds a critique of this attitude in the film - indeed it is this, even more than the exhilirating race scenes (filmed at an actual Diamond League meet at the Stade de France) that makes the film so compelling. Yannick's encounter with runner Leila (Rachida Brakni) signals the beginning of his liberation from his overbearing mother. It also marks the point where the viewer begins to understand that pity and over-protection are not the most helpful reactions to blindness. It is no coincidence that Leila has just come out of prison: this is a film about liberation. We, like Yannick, spend the film learning how to break free from the negative images of blindness which are still commonly found in both fiction and reality.
La Ligne droite was shown by the Institut français de Londres as part of their Beyond the Body season timed to coincide with the London 2012 Paralympic Games. My thanks go to the Institut français for inviting me to this special screening and giving me the chance to question Cyril Descours (and meet the French Paralympic Judo team).
Posted by Hannah Thompson at 18:51