Superhumans at the Wellcome Collection

Lord Sebastian Coe was right when he said that the success of the London 2012 Paralympic Games means 'we will never think of disability the same way'. Outmoded notions of 'normality', 'beauty' and 'perfection' have been shattered, or at least called into question, by the sheer diversity of the elite bodies competing during the Games. 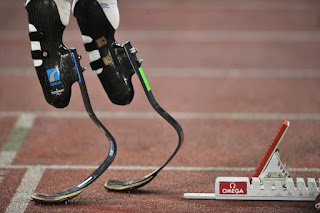 The controversy over the 'Cheetah' blades used by T 44 sprinters Pistorius and Oliveira at the Paralympics brought the issue of 'normality' to prime-time television. The prosthetic running legs used by these athletes are designed for their optimum performance. Unlike early prosthetics - such as those produced for the Thalidomide children in the sixties - Pistorius's legs do not try to blend in or 'pass' as actual legs. They privilege functionality over 'normality', announcing rather than hiding Pistorius's difference from the 'norm'. As such they force us to question why we hold the 'norm' in such high regard. Why should disabled people feel compelled to hide their differences behind artificial replicas of a perfect body part? Why shouldn't a children's television presenter have one arm? Why would contact lenses be used for cosmetic reasons to hide a deformed eye?

The Superhuman show at the Wellcome Collection demonstrates that human beings (both able-bodied and disabled) have been enhancing their bodies for thousands of years. In a provocative exhibition which includes a bronze statue of Icarus, an iphone, packs of Viagra, false teeth, eyes and noses, films about cosmetic surgery and details of how Thalidomide children refused clunky prosthetics in favour of their stumps, we are asked to rethink the ethics of enhancement and the reasons why we feel the need to strive towards a bodily perfection which rarely, if ever, exists in nature.

Superhuman is on at the Wellcome Collection, 183 Euston Road, London until 16 October 2012.
Posted by Hannah Thompson at 12:54