Melody: how (not) to introduce children to blindness 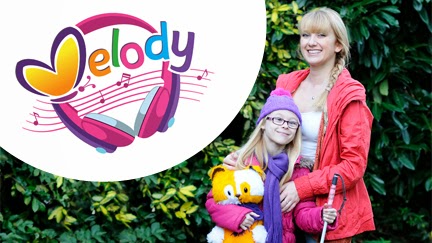 Melody is a new BBC show for preschoolers which is designed 'to introduce children to a variety of classical music through stories and delightful, colourful animation'. The title character is partially blind and according to the BBC's Grown-ups Blog, the show uses techniques such as vivid colours. exaggerated gestures and slower-than-usual camera movements to appeal especially to visually impaired viewers.

It is always wonderful (and still rare) to find positive disabled role models on television and the great thing about Melody is that her blindness is part of the show without ever being made into an issue or a problem. There is absolutely no sense of tragedy, no talk of triumph. Neither is her blindness down-played or ignored: neither Melody nor her mother are in denial about what she can or cannot see. No danger of her wanting to 'pass' as a sighted girl in later life. At the same time, Melody is a little girl like any other: she loves flowers, butterflies, the colour pink and her cuddly cat Fudge. Each time she listens to the day's music, she carries the viewer off into an imaginary world where she flies with birds, dances with butterflies and re-enacts fairy stories.

When I first watched the opening sequence I was delighted to see that the cartoon Melody is drawn with her white cane. As she happily dances through her imaginary landscape the cane is no longer a sign of stigma, but an enabling device which also happens to be a pretty cool accessory. There is a problematic moment in the opening sequence when the cane disappears as Melody's imaginary adventures progress. Surely, I wondered, this isn't an ableist suggestion that Melody is freer from her disability in her mind than she can ever be in real life? I needn't have worried. In the most recent episode, 'Flying High', Melody's cane is present both during her real-life trip to the park and in the subsequent imaginary adventure in the treetops.

As we saw with 'Notes on Blindness', it is never easy to depict blindness in a visual medium. The show needs to be accessible to the blind and the partially blind whilst at the same time also appealing to sighted viewers so that it can become the mainstream hit it deserves to be. Imagine if Melody became a role-model for both blind and sighted children! Unlike the directors of 'Notes on Blindness', the makers of Melody do not try and depict the world from Melody's point of view. We are not shown what she actually sees. Instead we are shown how she relates to the world around her. And in some ways this is more powerful because it shows sighted children (and their parents) that her way of being in the world is surprisingly similar to theirs.

The programme is not perfect. Melody's Mum is unrealistically chirpy and patient, their home is always wonderfully tidy and Melody is the best-behaved child I have ever come across. More worryingly, she never seems to play with anyone her own age and lives a weirdly isolated existence. And there is one aspect of the programme's premise which is in danger of reinforcing out-moded stereotypes of blindness. Melody loves listening to classical music and her imaginary stories are always triggered by the music she hears on her headphones. The power that music exerts over her is reminiscent of the myth which says that a blind person's other senses are somehow magically enhanced as a kind of 'compensation' for their lack of sight. This myth is dangerous because it posits blindness as lack, as something missing which needs to be replaced. In fact the producers handle this potential pitfall well: without falling into the trap of a mawkish triumph-over-tragedy narrative, the show manages to represent blindness in a wholly positive way. In fact, Melody's world couldn't be fuller and her blindness is celebrated as an exciting and creative force.

These minor misgivings notwithstanding, this is a truly ground-breaking programme in many ways. I have never come across anything quite like it and I hope it becomes a staple of preschool viewing for years to come. My only real regret? That it didn't exist when I was a little girl.

Posted by Hannah Thompson at 22:10