Audio Description in the Art Gallery 2

As part of some scoping work for my new research project on creative and collaborative audio description, I have been experiencing AD in various settings. Last week I went to a high-profile (and expensive) exhibition at an internationally renowned university museum whose AD provision was rather limited. Yesterday I went to a small exhibition at the Guildhall Museum in Rochester (Kent) who have adopted a much more inclusive, and impressive, approach. 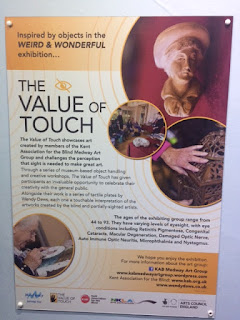 This photograph shows a poster advertising 'The Value of Touch'

'The Value of Touch' is an exhibition of work by members of the Kent Association for the Blind Medway Art Group curated and facilitated by artist Wendy Daws, whose new touchable art works also feature in the exhibition. Yesterday's tour was particularly remarkable for the layers of interconnected and collaborative audio and tactile experience it revealed and encouraged. At the beginning of the project, in July 2016, the artists were given an audio and tactile tour of objects in the Guildhall Museum's collections by the collections manager Steve Nye. They then worked with Wendy to create tactile art works inspired by the museum's artifacts. Not only was art created in response to tactile and audio experience, it also had tactility embedded within it. This meant that yesterday's audio described tour, delivered by Lonny Evans from VocalEyes, could easily incorporate a tactile element because all the art works were designed to be touched as well as looked at. In addition, Wendy added her own touchable art works to the show. 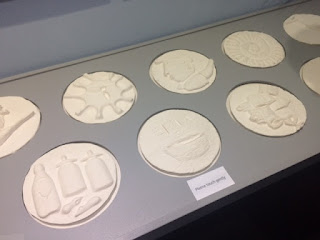 This photograph shows Wendy's artistic responses to the artists' work. Lonny's audio description says: "'Low Relief Tactile Representations' captures in tactile form the key artworks from the exhibition. A significant motif from each of the artists' work has been selected and rendered in 11 separate crystacal plaster plaques moulded from carved clay. The raised plaques are creamy white and about the size of a large side plate. They are embedded in two rows into a purpose built grey table." What Lonny doesn't say is that beneath the artworks is a sign, in print and braille, which says 'Please touch gently'.

These artistic responses to the artists' responses to the museum's objects create a third layer of tactile experience which visitors can explore alongside the artworks. Lonny's description adds an audio layer. When experienced together these four elements represent both an artistic response and a tactile-audio translation; a brilliant example of how access can be literally built into art and how art can be inspired by access as well as being mediated through it.

After describing the general layout of the exhibition spaces, Lonny gave us an audio account of a selection of the artworks on display before letting us touch both the artworks themselves and some of the artifacts which inspired them. Lonny also included quotations from the artists and those artists who were present also spoke about their own works. The result was an immersive, collaborate and inclusive audio and tactile experience which enabled visitors to experience art in a multi-sensory way.

As well as writing and delivering the AD script, Lonny has agreed to make it available online so that anyone can use it as part of their gallery experience. This means that blind (and sighted!) people can get a sense of the exhibition before, during or after their visit. The museum has also produced large print and braille guides to accompany the exhibition.

When I asked the Ashmolean why they had not produced large print, braille or audio guides for their Degas to Picasso exhibition, they said that it is generally not worth producing such materials for a temporary exhibition. But yesterday's audio tour at the Guildhall Museum''s temporary exhibition gave 20 blind and partially blind people an unforgettable and immersive experience. It is also now available to anyone who wants it. This exhibition is a model of best practice which other museums and galleries should be encouraged to emulate. This is because access is celebrated here for its creative and collaborative potential. It is positioned at the centre of this exhibition, not added (or more often than not omitted) as a costly and cumbersome afterthought.