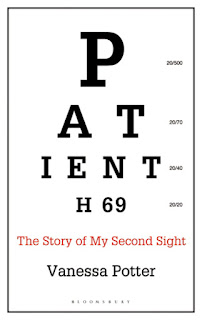 This image shows the front cover of Vanessa Potter's book. The title - Patient H69  - is presented in the style of the familiar Snellen eye chart. The subtitle - The Story of my Second Sight  - and the author's name sit beneath the eye-chart letters.


Vanessa Potter, otherwise known as Patient H69, lost her sight suddenly over three bewildering days. In this compelling memoir, - part patient diary, part journey into and out of blindness, part popular science book - she describes how her sudden blindness made her feel, what changed as she slowly regained her sight, and how her new way of seeing has changed her outlook on the world and herself.

When Vanessa and her publisher first asked me to read and review her manuscript I was worried that I would find yet another blindness-as-tragedy, triumph-over-adversity story. But Vanessa's refusal to accept the role of passive patient-victim, the pleasure she takes in the new experiences of her 'second sight' and the humorous and articulate way she talks about her own and others' reactions to her new way of seeing, saved this book from becoming yet another self-pitying account of blindness as almost death.

There is much of interest in Vanessa's tale. Some readers will love the human-interest aspect of Vanessa's story as she describes how her illness impacts on her life as wife, mother, daughter and friend. Some readers will be fascinated by the psychological and neurological explanations which underpin Vanessa's understanding of her condition. I am most interested in what Vanessa's story of sight-loss tells us about how visually-dependent and appearance-obsessed modern society has become.

It is fascinating to see how Vanessa's attitude to blindness changes. At first, she sees blindness as unimaginably awful, so unspeakable that she bans her family from even using the 'b' word. Although the terror she feels at the possibility of going blind is entirely understandable given how visually dependent sighted people tend to be, the passion with which she articulates her fight against her failing sight nonetheless still feels like an insult to blind people. When she refers to herself as 'staring with that blank, off-centre gaze that blind people have', Vanessa not only lumps all blind people into a homogeneous, alien and unattractive group, she also refuses to relinquish her sighted status, by talking about 'them' as opposed to her. Perhaps it is this inability to see herself as blind that prevents Vanessa from accessing services for blind people. As I read the descriptions of her struggle to weigh herself, her abandonment of reading, and her attempts to write with a giant felt-tip pen I was horrified that no-one offered to help her get hold of some talking scales, an audio book subscription or the kind of free text-to-speech software I discuss here.

After several days of total blindness, Vanessa becomes more appreciative of its nuances and wonders. At the very moment when her sight begins to return, albeit in odd, unpredictable and indescribable ways, Vanessa begins to appreciate the complexity of seeing and not seeing. Her struggle to put her new way of seeing into words is the book's most interesting part. For during this struggle she encounters society's misguided obsession with perfect sight and its consequent need to categorize people as either 'blind' or 'sighted'. Vanessa can read nothing on the Snellen eye chart. She is therefore officially blind. But she can see patterns, shapes, even faces. Yet the medical establishment has no way of measuring this kind of sight. By showing how seeing actually happens on a spectrum, and how it is as much about the brain as it is about the eyes, Vanessa reminds us that everyone sees things differently. No-one has perfect sight so everyone is partially blind.

Vanessa quickly learns to supplement her sight with her other senses and the enjoyment she takes in this new way of relating to the world is a precious reminder that sight is not as necessary as we often think. The multi-sensory nature of Vanessa's prose reflects her other senses' expansion. For example, her description of the sound of the nurses' shoes as an 'invisible symphony' is a clever and synaesthetic way of combining (non)sight with sound to emphasize the power of the latter over the former.

But despite this increasingly multi-sensory approach, which is beautifully and evocatively reflected in her prose, Vanessa refuses to give up her fight for sight. Throughout the book she insists again and again on her need to see. This stubborn reliance on sight is the book's most important, yet most unsettling message: by revealing just how embedded sight is in most people's sense of their own identity, Vanessa unwittingly reveals the complex reasons why most people are terrified of losing their sight. Anyone who is frustrated by society's refusal to acknowledge the validity of their particular way of seeing will find much to relate to in this enthralling account.

Patient H69 is available in print and e-book here. Enter PATIENT at the checkout to receive at 30% discount. It is available from amazon here as a kindle or audio book. At my behest, Bloomsbury have provided descriptions of all the images found in the book here.

Posted by Hannah Thompson at 15:39