A Bicycle Made for Two

When I got married 9 years ago, some of my friends got together to buy my husband and I a wonderful blue tandem: 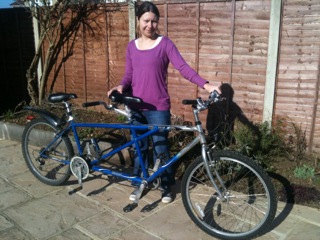 Me and my tandem

I was (and still am) delighted with the present and saw it as a symbol of the teamwork, compromise and companionship which make for a successful marriage. We were often to be seen cycling across Cambridge and we still use it now in Oxford on our relatively infrequent but precious childless trips out to the cinema or for dinner. Tandems are rare and I always love the looks and occasional comments we get as we fly along. Simon sits in front and steers and I sit behind and provide the power behind our journey. I wouldn't say that this arrangement necessarily replicates our roles within our marriage, but it does remind us that we are a great team.

On my wedding day, when my best friends proudly showed me a picture of our new tandem, it never occurred to me that my tandem might also function as a symbol of the complicated relationship between the sighted and the blind. Of course they probably would not have bought if for us if I had enough sight to be able to ride confidently alongside Simon on my own bike. But for some reason this thought never crossed my mind. But last week I came across an extraordinary picture which made me think again about tandem cycling and blindness. 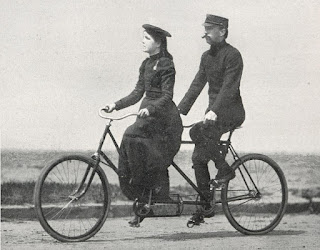 In this tandem picture, a blind woman sits in front, with her male companion behind. At first glance, this picture seems to represent an amazingly liberating and liberated experience for the blind cyclist (not to mention the female cyclist). When I first saw this picture, I imagined that the sighted man was describing the route and any oncoming hazards and trusting the blind woman to steer their course accordingly. But if you look closely at this picture (and here the more sight you have the better), you can see that this tandem has a mechanism which means that the sighted cyclist at the back is in fact steering the bike from behind. The blind cyclist only has the illusion of control; in fact she is being led by her male companion. Is this a depressing reminder of blind people's dependence on their sighted guides, or a celebration of the possibility of blind Independence?

I think this blind cyclist has more control over her journey than the discovery of this remarkable mechanism might lead us to believe. She is at least in part powering her own movement rather than having to rely on public transport or a lift from an obliging friend. And her position upfront implies that she has perhaps set the destination and dictated it to her companion. In practical terms, she could always just stop pedalling or put her feet down to stop the bicycle in its tracks if she didn't like the direction the bike was taking. Just as in marriage,  her companion relies on her goodwill just as much as she relies on his.

When Simon and I are out on our tandem I never feel like I'm being led by him. We have always decided in advance where we are going and I don't hesitate to suggest an alternative route if I don't agree with his choice. And he wouldn't get anywhere at all if I just stopped pedalling.﻿
Posted by Hannah Thompson at 12:47