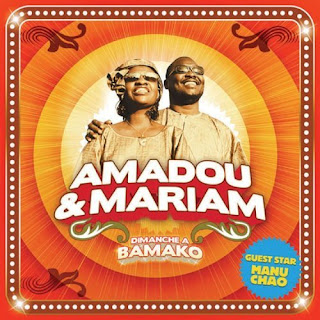 Have you ever done that thing where you are wandering round a shop and you like the music they are playing so much that you go up to the cashier and ask them to sell it to you right there and then? I have only done that once and it was Amadou and Mariam's first album Dimanche a Bamako that I bought. I was in Borders in Oxford looking for a Father's Day present for Raffy to buy for his daddy. Raffy was about 18 months old and asleep in his pushchair. I was very pregnant with Zak.
This was the song I heard first. As soon as I heard the music I knew that Simon would love it too. It was in French and produced by Manu Chao. What's not to like?

Amadou and Mariam are both blind. It was a while after discovering them that I found this out and I forgot it almost immediately. It didn't seem like a relevant piece of information at the time. But now, as I think about their relationship to the representation of blindness. Amadou and Mariam embody two of the cliches which I have found most recurrent in nineteenth-century-French writings about blindness. Firstly, that the blind make exceptionally gifted musicians. And secondly, that blind people (but presumably especially the sighted population) are better off when they marry between themselves. It would be very tempting to keep Amadou and Mariam trapped in this blind ghetto by telling their story as a heart-warming struggle to overcome adversity. But to do this would be to miss the point of their music. This article on Amadou et Mariam manages not to make a big deal out of their blindness. Instead, it encourages its readers to listen to their music as a way of rethinking their own relationship to the world. And it does this by denigrating the importance of the visual. What happens to our relationship with the world if we close our eyes? Sounds which once seemed to exist in the background move into the foreground and become our way of making sense of what is happening around us.  By including Malian street sounds at the beginning or end of their tracks, Amadou and Mariam are offering us an audio snapshot of their view of the world. After reading this article I understand why I love listening to music in the dark or, failing that, with my eyes closed. When you remove the visual, the audio at last becomes the centre of the world.

With thanks to Adam Watt for sending me the article from The Guardian which inspired this post.
Posted by Hannah Thompson at 18:12