Looking at the Blind 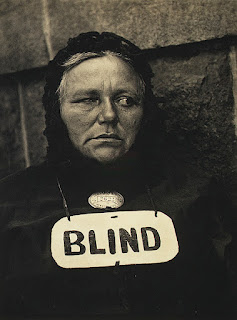 This striking image of a blind beggar was taken in New York by Paul Strand and published in 1917. It raises fascinating questions about the politics of looking at the blind. This women's use of a large written label immediately puts her on display. She is positioning herself as an image to be interpreted, a text to be read. She is an object to be looked at. She is also positing herself as a victim of misfortune. The assumption here is that her label will encourage people to pity her and thus to help her. This woman's use of a textual clue demonstrates that despite (or perhaps because) of her blindness, she has a profound understanding of how the sighted world works. People are always looking, always interpreting and always responding to what they see. This  beggar's use of visual clues knowingly exploits the way the sighted relate to the world.

The fact that this woman has been immortalised in a photograph raises another set of issues. Photography is of course a profoundly visual medium. And by making a blind woman the subject of a photograph, the artist suggests that blindness is not necessarily the opposite of vision, it is (or it gives rise to) another kind of vision. Or, to put it another way, blindness has led to vision because it has led to a photographic image.

I'd like to know how this woman would feel about being looked at and photographed in this way. Her use of the sign and her situation on the street already position her as an object of the public gaze. But she is doing this for a reason. Does she know that she is being photographed? Does she even know what photography is or implies? Another way of reading this photograph is to say that it emphasises - indeed extends - the gulf between this woman and the sighted people who look at this photo. The viewer's difference from her is encapsulated in their very act of viewing. As soon as someone sees this photograph, they are reminded that they possess the very thing whose lack has led to the creation of this image. It seems very fitting that it is this woman's blindness which reinforces the sighted viewer's sense of his or her own superiority over the subject of this photograph. The viewer can see her blindness precisely because he or she does not experience it. In another way, of course, vision lets us down in this picture. We cannot tell by looking at this woman that she is blind. It is only by reading the textual clue that we know this. But what if this clue were a lie? What if this woman were not blind? When we look at this picture we trust what we see and we assume that the written sign refers to the woman it is attached to. How would our reading of this photograph change if we knew that this woman was looking back at the photographer?

My thanks to James Kent for introducing me to this picture during his talk on the flaneur in Cuba as part of RHUL's seminar series.

Click here for more on Paul Strand's photo
Posted by Hannah Thompson at 10:53

Email ThisBlogThis!Share to TwitterShare to FacebookShare to Pinterest
Labels: begging, blindness, looking, photography, the blind, the flaneur, the gaze