Audio Description (3): Even better for Action 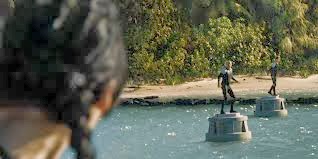 Katniss looks towars two other tributes at the start of the 75th Hunger Games.

I had my first audio description experience around 18 months ago and - as this post shows - I was absolutely blown away by it. Since then I've had a couple of disappointing experiences where the AD didn't work: as it only starts at the beginning of the film it is always too late to fix it if you don't want to miss the beginning. After a very helpful email exchange with Odeon, we have realised that AD works best in certain, quite specific, parts of the auditorium. Last night, when I picked up my AD headset, the usher was enormously helpful. He accompanied me to the auditorium, showed me where I should sit for best coverage and came back at the start of the film to check everything was working. I am so glad I persevered with AD and didn't just give up: if I hadn't got in touch with the cinema and asked them to find out which seats have optimum coverage I wouldn't have had such an amazing cinematic experience last night


I already knew that AD works brilliantly for costume dramas but last night I discovered that it is also a fantastic addition to fast-paced action films. Because it is set in a futuristic and imaginary world, The Hunger Games: Catching Fire is full of objects, people and settings which are unfamiliar and therefore difficult to guess at. When I use my eyes to interact with the world I rely mainly on context to tell me what things are. If I see a dark, circular shape on my son's bed, I am pretty sure it is either our cat or his folded up dressing gown. But if I saw the same shape lying on, say, the floor of my office at work, I would have absolutely no idea what it was until I touched it. The AD in The Hunger Games told me about all kinds of key plot-related objects - such as brooches, bracelets, lockets, axes and red-tinged drinks - whose significance I would otherwise not have understood.

I knew that AD would also be incredibly helpful for identifying the various tributes. As they were all wearing the same uniform during training and in the arena, it was impossible for me to tell them apart. And when the dead tributes were projected into the night sky, my describer helpfully told me their names and districts. (I have it on good authority that sighted viewers did not always have access to this information). But I was surprised to find that AD really comes into its own during fight scenes. The speed and darkness usually associated with such scenes make them impossible for me to follow. I tend to sit back and enjoy the general atmosphere knowing that the outcome of the fight will become clear at some point. With AD I was completely immersed in the action, utterly captivated and more involved in a film than I have ever been. It makes we want to re-watch every single film I have ever seen to fill in all the gaps I now know there must be.

It is hard to describe the effect AD has on my film-going experience but I suspect it might be compared to the addition of 3-D. For obvious reasons I have no idea what the appeal of 3-D is, but I imagine that it gives the sighted viewer the kind of ultra-intense cinema experience that AD gives me. AD is neither intrusive nor unwieldy. It is an art form in its own right, an enhancement, an amelioration. It becomes part of the film itself, enhancing the action like a good football commentary might. It more than doubles the pleasure I get from a film. My only regret is that it does not also exist in real life.

Posted by Hannah Thompson at 12:13