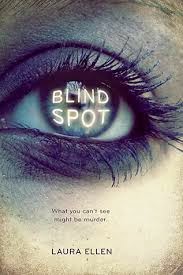 This novel is the first novel I have come across to feature a partially blind protagonist / narrator. 5 of the 6 other novels I have reviewed so far feature totally blind central characters and the 6th, the Adrian Mole series, only makes passing reference to the diarist's partially-blind friend Nigel. It is easy to think we know what it is like to be totally blind. We think that by closing our eyes we get a glimpse into the dark world of the unsighted. In fact, most people who appear blind perceive some light or movement. And the minority that see nothing at all do not necessarily experience the world as blackness. But for reasons that I have yet to fully understand, this is the image of blindness which popular culture favours. It is much more difficult to imagine what it is like to be partially blind.

Laura Ellen's first novel Blind Spot offers a detailed and emotionally-charged insight into the world of a teenager with juvenile macular degeneration. The narrator's descriptions of unknowingly walking past friends, struggling to read the board or take notes in class, fumbling with a tricky locker combination and failing to find people at lunch are a strikingly realistic portrayal of what it can be like to live with low vision in a sighted world. At the beginning of the book, Roz is not a particularly agreeable character: she is superficial, self-absorbed and aggressive. But worst of all, she is in denial about her blindness. She has internalised the American High School dream and desperately wants to 'pass' as 'normal'. She jumps at the chance of dating the captain of the hockey team and despises the other students in her 'Special Ed' class. In short, she is ashamed of her disability. She stubbornly hides her eye condition from her classmates and would rather appear rude, stupid and stand-offish than blind.

I found it difficult to like a protagonist who seemed to so uncritically subscribe to the 'blindness as tragedy' school of thought. But Roz's character was more complicated than I first gave her credit for and the book is about much more than her eyes. She was not in fact in denial about her eyesight, but shrewdly aware of high school society's inability to cope with difference and more ready to play along than to attempt to change the system. Nevertheless, her belief in Ruth's ability to get a job in the 'real world' testifies to her pro-disability-rights tendencies and her desire to understand how Tricia died crucially demonstrates her conviction that all individuals matter equally.

Aside from noting how the politics of blindness were explored in the novel, I was especially interested in how Roz's macular degeneration affected both her narrative and her crime-solving abilities. In a book about challenging both literal and metaphorical perception, it would have been easy for Ellen to equate Roz's poor vision with lack of knowledge, poor perspective or flawed insight. But although Roz's inability to distinguish faces, cars or the details of a photograph meant that it was hard for the authorities (and sometimes the reader) to believe her version of events, in the end it was not what Roz could or could not see which mattered, but what she did about it. Ellen seemed to be saying in fact that good eyesight was overrated, and that it was certainly not a necessary prerequisite to successful sleuthing.

This book could have become a saccharine story of redemption and acceptance. Instead it has no real conclusion. The mystery of Tricia's death remains unsolved and Roz's attitude to her disability unresolved. As well as perhaps promising a sequel, this lack of closure serves to highlight the ongoing nature of Roz's relationship with her blindness. Whether she likes it or not, she will spend her life answering the sighted person's favourite question: 'But what can you actually see?' and the answer she gives will change on an almost daily basis.  Her desire to 'pass' will co-exist with her need for magnifiers or white canes which mark her out as different in a world still obsessed with the normal.

It is wonderful to find a mainstream YA novel which features a partially blind protagonist. Disabled characters are still woefully absent from fiction and when they do appear they tend to reinforce rather than challenge stereotypes. This novel is refreshingly free of disability preconceptions and comes highly recommended.

Posted by Hannah Thompson at 18:37