Blindness in Fiction 6: She is Not Invisible 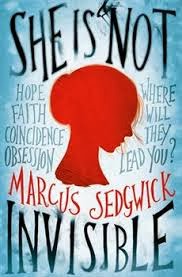 She is Not Invisible  is a Young Adult mystery thriller by Marcus Sedgwick. I was keen to read this book when I heard - via the facebook Disabookability group - that it is narrated by blind protagonist Laureth. Books with blind narrators are relatively rare. In my experience, most books featuring blind characters are narrated by a sighted person who describes the blind character from a sighted person's point of view. It is wonderfully refreshing for me to read a book whose vision of the world is close to my own. Not only is Laureth very attuned to the smells and sounds which surround her, she is also wonderfully self-aware. She is thoughtful and articulate about what it is like to be a blind person in a sighted universe, and she is particularly interesting when she talks about what she feels she has to do in order to make sighted people feel more comfortable around her.

By the end of the novel I was utterly in love with Laureth. And I really hope she reappears in future Sedgwick novels. But for the first few chapters I was very angry with her. Laureth spends the early part of the book pretending she is not blind. She goes to the most confusing of public places, an airport, and attempts to 'pass' as fully sighted. When I first read these parts of the book I was furious. Why, I thought, is she so intent on hiding her condition? Is she ashamed of being blind? Has she internalised all the stigmas associated with blindness to such an extent that she refuses to accept her own reality? Doesn't she realize that this kind of denial emphasizes the 'blindness as tragedy' trope which is all too common in both fiction and the media? Doesn't she know that a white cane can function as a badge of honour, not a symbol of shame? Doesn't she realize that by 'outing' herself as a strong, funny, capable and caring blind girl she could teach every sighted person she meets not to judge people on how they do (or do not) look?

I very nearly gave up the book at this point. But I was already hooked by the beguiling storyline. And I was curious to see how far she could get. I'm glad I persevered. As the book goes on it becomes clear that Laureth has very good reasons for hiding her blindness. And these are related to plot rather than to her own identity. She is in fact a mature, thoughtful, adventurous and practical teenager who will do anything to keep her family together. Throughout the book the author throws in a number of apparently incidental details which subtly tell us that Laureth lives a life which is just as fulfilling as that of any other sixteen year old.

More than Laureth's healthy attitude to her own blindness, what I like most about this book is its plot. Without giving anything away, I can say that the plot is fast-moving, complicated and utterly compelling. It is the kind of book which keeps you reading and which leaves your head spinning with its own possibilities. What is more, as soon as you have finished it you will want to turn straight back to the beginning and read it again. But what I like best about the plot is that it is not dependant on Laureth's blindness. Unlike so many books which feature blindness, the essentials of the story would have been more or less the same had Laureth been sighted (except, perhaps for the presence of her two travelling companions). Aside from the scene in the hotel room in the penultimate chapter, where Laureth uses her blindness to her advantage, the action would have run more or less the same course. This is important because it shows that blindness is not the be all and end all. It is one element which can influence a person's behaviour. But it is not the over-arching defining feature. Laureth is blind but she is so much more. And in the book we learn that her blindness is not the most important thing about either her or her story.

I do have some misgivings about the book's portrayal of blindness. Although I can now see why Laureth hides her blindness at the beginning of the book, I still don't understand why she doesn't use a white cane later on. It felt odd to me that she didn't refer to one at all, not even to explain why she has chosen not to use one. Unlike her brother, Laureth is a bit of a techno whizz yet it doesn't occur to her to use the GPS function on her iphone (which would have been especially handy in NYC). The author has clearly researched his topic well and this book does much to undermine several stereotypes of blindness. But in his Author's Note, when he thanks the students and staff of New College Worcester, he makes one slip which I'm sure Laureth would have hated. He describes this school for the blind as 'a genuinely inspiring place to visit'. 'Inspiring' is one of the words disavowed by Disability Studies because it tends to paint disabled people as either awe-inspiring heroes or victims to be pitied, and in both cases as unfortunate beings who spend their days overcoming obstacles and battling against adversity. This depiction is in danger of aligning itself with the 'blindness as tragedy' myth which this brilliant book does so much to dispel.

Posted by Hannah Thompson at 21:30