The Voice Part 2 The Result

In April I wrote about Andrea Begley's 'blind' audition for UK TV show The Voice : in that post I wondered how the judges - and the voting public - would deal with the presence of a partially blind singer in the competition. Would they reward her for her voice, or would they vote for her out of a misplaced sense of condescension and pity?

I have enjoyed watching Andrea's progress in the competition. Her folksy, melancholic, guitar-strumming, female-acoustic, singer-songwriter vibe is my favourite kind of music. But in a way I've been more interested in  how the show's producers have dealt with her blindness. And I've been pleasantly surprised. In the clips which precede each singer's performance they have focused on Andrea's sense of humour, wit and independent spirit rather than her disability. They showed her at work, travelling with her white cane and chilling with friends and family. There was absolutely no talk of triumph or tragedy. The judges have been less careful in their choice of words. Their repeated use of adjectives like 'inspirational' and 'brave' verge on the patronising and speak more of their own disabling attitudes than of Andrea herself.

Last night I had mixed feelings when Andrea unexpectedly beat favourite Leah McFall to win the show. On the one hand I was of course delighted for her. Not only because this might be her way in to a notoriously shallow and judgemental business, but also because we are desperately in need of positive disabled role models. But even as I type those words I worry that by giving Andrea the responsibility of being a role-model for the visually impaired, I am celebrating her not for her voice, but for her disability. And this is exactly the opposite of what she wanted to achieve by being on the show in the first place.

I hope that Andrea's unexpected win was down to the fact that all those who love her voice voted for her. And also, perhaps, that Leah's fans were lulled into a false sense of security and thought her victory was so guaranteed that they didn't need to bother. But I worry, despite the production team's brilliant handling of Andrea's disability, that there were some people who voted for her out of pity, some people who felt sorry for the poor blind girl.  If this is the case, and I fear it is, then attitudes to blindness, indeed to disability in general, have not changed as much as the success of the Paralympics led us to believe. As I prepare to leave for Paris to speak at the International Colloquium on the History of Blindness and the Blind, I am glad that Andrea has earned herself a place in the history both of blindness and of popular culture. But I await the next chapter in her career in the hope that it will put my nagging doubts about the motives of the voting public to rest.
Posted by Hannah Thompson at 19:44 2 comments:

The Taboo of Blindness 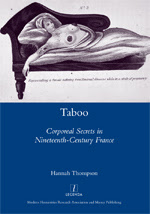 When I was a child, blindness was a taboo subject in our house. We never mentioned the word if we could help it and I remember a feeling of icy awkwardness descending if we ever encountered references to blindness or the blind on television. With the exception of The Little House on the Prairie I don't remember being read any books with blind characters in them and I suspect that my mum would rather not have read me the blindness episodes in Laura Ingalls Wilder's books. When we had to talk about what I could and could not see, I referred simply to 'my eyes'. When asked, I might say that I was 'half-blind' or 'registered blind' (in fact I was quite proud of being 'different' or 'special' sometimes) but I did not see myself as 'blind'. This was why I would not carry a white cane and hated 'mobility training' with a vengeance.

It was this refusal, both by me and by those around me, to address my blindness directly which led to my ferocious desire to 'pass' as a sighted person and deny my blind identity. The taboo status of 'blindness' made it a negative notion which I could not relate to my own reality. But it was also this negativity which surrounded 'blindness', a negativity learnt from prevailing societal attitudes to it, which rendered it taboo in the first place. Rather than admitting that I was blind, it felt easier to ignore it and hope others would do the same. It is only in the last eighteen months or so that I have been able to happily embrace my blind identity, an identity which now sits in a sometimes easy, sometimes conflictual, but always interesting relationship with my sighted self.

When I started thinking about how taboo aspects of bodily reality such as female sexual desire, illness, sado-masochism, disability, impotence and incest are represented in nineteenth-century French texts, I had no idea that this project would lead to my own personal interrogation of the taboo on blindness. But in my book, Taboo: Corporeal Secrets in Nineteenth-Century France, published this month, I demonstrate that it is only by engaging with potentially difficult subjects that we can rid them of the negativity which surrounds them. As I argue in my Conclusion:

'The taboo bodies which this study has uncovered are crucially important because they invite us to look again at our own misconceptions of what makes the body normal, beautiful, or perfect. Like the social model of disability, they urge us to rethink our understanding of how bodies relate to the world. [...] Exposure to the taboo is a necessary, though not always a comfortable, part of becoming an engaged and insightful reader. By discovering the form and function of the taboo bodies hidden at the text's heart, the reader is finally free to question his or her own misconceptions and thus begin to relate to bodies of any kind in new and enlightened ways.'