Blindness and Art: An Interview

This week I was interviewed by Paul Hammond of UCB UK. You can listen to the full interview below. Provided courtesy of UCB Media UK.


Posted by Hannah Thompson at 16:43 No comments: Links to this post

I spent last week in Winnipeg, Canada where my tireless Blind Creations collaborator Vanessa Warne had arranged for me to give lectures and teach classes at the University of Manitoba and the Université de Saint-Boniface. I also enjoyed sharing experiences and insights with the Manitoba Disability Studies Network before exploring Vanessa's fascinating 'Books without Ink' exhibition.

On my last day, Vanessa gave me a tour of the Canadian Museum for Human Rights which has recently opened in Winnipeg. We had passed the imposing building several times during the week and I was eager to look inside. 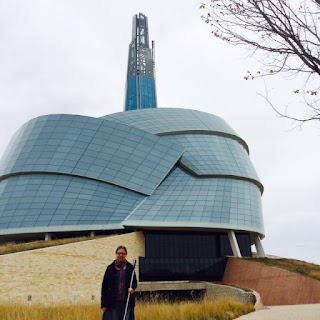 This photo (taken by Vanessa) shows me
standing outside the Canadian Museum for Human Rights. Behind me is the windowless metallic shell of the lower part of the building and the imposing glass and steel tower above it.

The museum begins by exploring various definitions of human rights. It goes on to focus on some historical moments when human rights were violated and ends with a look at what present and future generations can do to keep human rights abuses in the past.

In the gallery devoted to the Holocaust, I was interested to find a display on Nazi propaganda which includes a 3-D model of a head amongst its exhibits. The head, which represents a man with stereotypically Jewish features, was used by the Nazis to teach blind students how to recognise (and then presumably denounce) Jewish people. 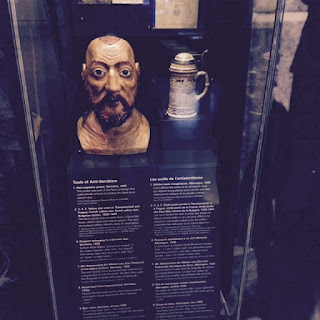 This image shows a model of a stereotypically Jewish man's head in a display case. Next to the head is a beer tankard  with an anti-semitic slogan. Below the exhibits is the museum's explanatory text.

As well as demonstrating Nazi Germany's racist attitude towards Jewish people, this head also reveals much about their somewhat contradictory attitude towards blindness. Although the existence of the head suggests that the education of blind people was taken seriously in Nazi Germany, it also problematically assumes that blind people go through life feeling people's faces. This assumption reveals an offensive lack of knowledge of the lived experience of blindness. Unsurprisingly, in a later display in the same room, we learn that disabled people were targeted by the Nazis because they were seen as an unproductive burden on society.

The museum is highly interactive but its multi-media emphasis means that much of its information is conveyed visually, through graphics, films and photographs. Vanessa and I were keen to know how the museum accommodates blind and partially-blind visitors. As we bought our tickets we met a very helpful staff member who was delighted to provide us with Braille maps, an iphone with an audio overview of each gallery (run with Voice Over) and a set of earphones which I could connect to individual displays for more information. This was undoubtedly my favourite accessibility feature and one that I have not come across elsewhere. Stations next to some exhibits allowed me to listen to audio descriptions of the displays whilst also providing audio versions of the printed labels. After a little bit of practice the tactile buttons were easy to use and it was even possible to accelerate the speed at which the text was read. 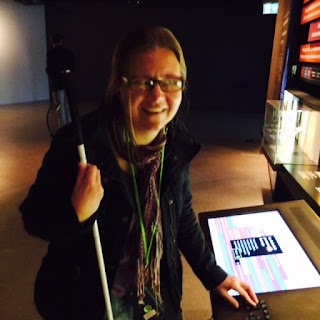 In this photo (another of Vanessa's) I am exploring a tactile keypad with my left hand whilst holding my white cane in my right.

Although this feature was not available at every display, and some audio tracks worked better than others, the provision of earphones allowed me to appreciate the museum's content at my own pace and in my own way. This is not always possible with traditional audio guides which often rely on the visitor locating numbered labels within a gallery and which, because they are intended primarily for sighted visitors, can be unhelpfully visual in their use of language.

Given its subject matter, it makes sense that the Canadian Museum for Human Rights wants to be the world's most accessible museum and I would say it is certainly the most accessible space I have visited. But there is one aspect of the museum which betrays an oddly ableist approach to blindness and sightedness. 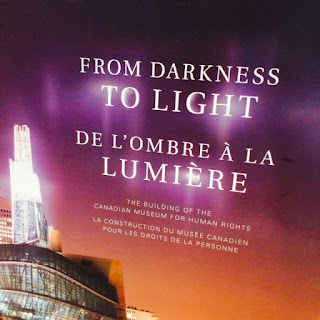 This photograph shows the museum's motto, 'From Darkness to Light'/'De l'ombre à la lumière' on the wall behind the ticket counter.

Both the museum's architecture and its narrative are built around a hierarchical binary opposition between darkness and light in which the 'darkness' of ignorance is replaced by the 'light' of knowledge as we progress from a past full of human rights abuses to a more enlightened future. As we walk further up the building's ramps (no stairs here!), the space becomes lighter and lighter until we reach the Tower of Hope, a glass viewing area overlooking the city of Winnipeg. Although it is tempting to see this darkness-to-light trajectory as an effective, if simplistic, representation of humanity's progress, I am tempted to see it as a more sinister demonstration of society's abiding belief in the superiority of sight in the hierarchy of the senses, a belief which leads to the privileging of sightedness over blindness. By celebrating the triumph of light over dark in the building's very fabric, the museum sends its visitors a powerful, albeit subliminal, message. Not only are we told that sight is synonymous with knowledge, we are also told that it is better to see things than to not see them. Such a message is dangerous because it reinforces a belief that most people do not even realise they have until it is challenged - that is, the belief that a blind person's lack of sight is, like the human rights violations to which it is unwittingly compared, a tragedy which should be eliminated by progress.

It is ironic that a museum which is so clearly committed to equality of access and opportunity - and which has got a lot right on that front - appears to embrace such an ableist message without even realising it is doing so.
Posted by Hannah Thompson at 17:07 No comments: Links to this post