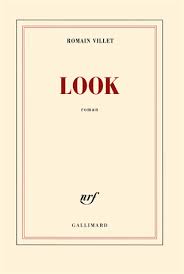 The image shows the front cover of Look by French author and musician Romain Villet which was published by Gallimard in February 2014. It has been reviewed in French on the vues interieures blog.

When Romain Villet discussed his work at Blind Creations, he made the point that it is difficult to talk in English about a book written in French. This made sense to me because since reading Look (in French) last year, I have been struggling to write about it in English here. This is because Look is not only written in the French language; it is also about the French language. French is not merely the medium through which the narrator - Lucien - expresses himself, it is also the subject of much of what he says. Lucien is a blind musician and avid reader who eschews visual description. Instead he recounts his life in Paris, his love affair with the elusive Sophie and their trek in the Atlas mountains through a mixture of clever word play, erudite literary references, poetic fragments and obscure allusions to musical scores. Whilst I found the novel by turns funny, moving and beautiful, I also found it frustratingly dense: there are so many intellectual references in it that I'm sure that I, like Sophie, don't properly understand everything the narrator is saying.

But as I listened to Villet discussing his work during the conference, I realised that this is the novel's point. A little like Herve Guibert's Des Aveugles [translated as Blindsight], Look uses deliberately difficult references to oblige the reader to question her relationship with the world. Just as Lucien often feels excluded from the sighted world in which he is forced to operate, so we feel excluded from his world of musical and literary references. And so we are forced to discover a wonderfully non-visual way of being in the world which is as rich, absorbing and stimulating as anything I've ever read.

As well as being a meditation on how blindness might create a different kind of writing, Look is also about how blind people read differently. (And as such it reminds me of my own way of reading in detail.) I particularly like the way the narrator describes how the digital revolution has changed his reading habits. Before text-to-speech software made some books accessible to blind people via the internet, Lucien would read Braille books borrowed from specialist libraries. Apart from never being able to own the books he loves, Lucien resents the fact that he can never annotate this reading matter with comments, underlinings or marginalia. He can neither personalise nor re-read but must commit every sentence to memory as if he would never encounter it again:

It turns out that Villet feels much the same. In a fascinating radio documentary (also in French), 'Victor et Moi' (available here), he demonstrates how his portable reader has changed his relationship with books. It feels particularly fitting that in the documentary he visits several places which provide accessible books, including the Association Valentin Hauy, where Blind Spot started.

Look is an important book - which deserves to be more widely known - because as well as these meditations on writing and reading blind, it offers a realistic, humorous and intimate portrait of life as a blind person. Lucien is wonderfully at ease with his blindness; he shares my belief that blindness is neither a drama nor a tragedy; it is just a (slightly inconvenient) way of being in the world. One example of his dry humour is his point that because blind people take longer to do certain things (like peel carrots), they should be given a third extra time in life as they are for their exams:

But until Look is translated into English - an almost impossible task but one which I'd love to have a go at - its celebratory view of blindness will remain the preserve of the Francophone reader. Such readers will appreciate Lucien's thoughts on the intranslatability of blindness, a sentiment which the book's very existence ironically undermines:

Blind Creations: Pride, Nostalgia and the 'Economy of Trust'

Since the Blind Creations conference ended on Tuesday, I have been trying to decide how to write about it here. The event, which I organised with Vanessa Warne, was three days of fascinating insights and new encounters from which I emerged at once energised and exhausted; delighted yet already nostalgic and a little sad. For most of the time, I was so busy running the conference, that I didn't have time to attend the sessions. I have yet to hear the fascinating panels on audio description, haptic art and tactile books, although I did catch most of the wonderful plenaries. Happily, we will soon have an audio archive of the conference on the site, so I will be able to discover everything I missed.

Until then, my imperfect knowledge of the conference means that in this post I want to discuss other things. Whilst I am not yet ready to comment on the academic side of the proceedings, I can focus on the incredible community which developed during the event. What struck me as I flitted from person to person - welcoming, explaining and answering questions - was the amazing warmth, generosity and open-mindedness of the attendees.

I was particularly struck by the exchanges between non-blind people - or SVDPs (Severely Visually Dependant People), as Georgina Kleege described them in her plenary - and blind people, which proliferated during the event. Almost half of the 116 delegates were blind and negotiating unfamiliar spaces was logistically complicated. So we quickly established what Ryan Knighton referred to as 'an economy of trust' where blind people were happy to be guided, described to and generally supported by non-blind people whom they had never met. The constant elbow proffering and taking which went on created a thrill of public intimacy which I have never encountered before. And how lovely it was not to be the only blind person in the room. What a relief to know, for once, that I was not the unsolicited focus of an (often pitying) sighted gaze..

An outsider observing the conference might have thought that the blind people being led about were dependant on their sighted guides. This may have been the case sometimes, especially on the first day when everything was new to everyone, but as the conference went on, it became clear that the sighted attendees were just as, if not more, reliant on the blind conference goers.

The non-blind delegates did not need to be physically guided, but they did need help of a different kind to negotiate blind culture. By engaging with blindness both as the subject of the conference and as the way of life for many attending, non-blind people were constantly forced to challenge their own misconceptions of blindness and rethink their personal sensory hierarchies where sight almost always dominates. Time and again I overheard conversations in which non-blind people were enthusiastically extolling the virtues of touch, hearing and taste. For a few short days, we created an alternative world where vision became the least important of the senses.

It was not only the conference delegates who were changed and challenged by their creative encounters with their own and others' blindnesses. Across Royal Holloway, staff and students were confronted with more blind people than they had probably ever seen. Everyone who had anything to do with the conference or its delegates very quickly learnt how to give audio rather than visual clues, how to describe in a non-visual way, how to guide with respect and humour. I like to think that  'Blind Creations' touched many people who will probably never think of blindness in the same way again.

Most of all, this conference made me proud. I am immensely proud that Vanessa and I managed to create such a unique event and I am proud that we gathered such an extraordinary group of people around us. But more than that, I am proud to be part of the vibrant, intellectually demanding, passionate, hilarious and deeply generous creatively blind community. I have never felt so glad to be blind.
Posted by Hannah Thompson at 13:03 2 comments: